Posted on 20 June 2008 by catholicsensibility 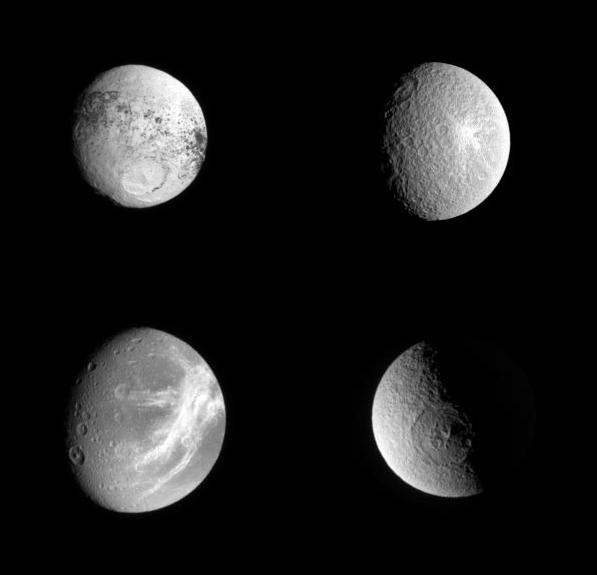 When I was in college my friend Mark, an astrophysics grad student, took me to the Mees Observatory, our university’s in-state research telescope. Among other things, we viewed Giovanni Cassini’s Louisian Stars—named for King Louis XIV, the astronomer’s patron at the Paris Observatory.

Clockwise from upper left they are Iapetus, Rhea, Tethys, and Dione. Being mostly ice balls about half the size of Earth’s moon, it takes a bit of imagination to tell them apart. Iapetus is the “yin-yang” moon, half bright as snow, half dark as coal. (see right) Nobody is quite sure why or how. Then there’s that equatorial ridge that shapes the moon like a walnut.

Rhea is slightly larger than Iapetus and may have a ring. That would be a solar system first: a moon with a ring. Otherwise, it’s a rather pedestrian cratered orb, much like astronomers expected in the outer solar system before the Voyager probes. Looks like Earth’s moon in close-up, but don’t be fooled. There’s a lot of ice down there.

Tethys has a few big features, that big impact basin on the terminator above and a long canyon that seems to be a crack that nearly split the moon in two or more.

Dione has those wispy markings. Turns out they’re cliffs.

You can’t see this kind of detail from Earth, by the way. From the home planet, these moons look very much like faint stars. We know otherwise because they revolve around the giant planet Saturn. I’m not sure I would find the young Cassini as interesting a skywatching partner as my friend Mark or even Galileo. Cassini got his start in life with an interest in astrology. (I didn’t misspell that.) But that didn’t stop him from scoring many successes in the world of science: tying Galileo with four moons discovered, co-discovering Jupiter’s Great Red Spot, and deducing the different rotation speeds in Jupiter’s banded atmosphere. Later in life he repudiated the topic that now rubs shoulders with celebrity gossip in our print media. Maybe Cassini isn’t such a bad guy after all. They did name that NASA probe after him.

By the end of my college days, I had observed the Louisian Stars to add to my views of Titan and the Galilean satellites. That put me at the end of the 1600’s, so to speak. The aided human eye was able to discern solar system moons down to about magnitude 11 by the end of that first century of telescope-making.

The solar system’s 17th century moons number nine. The first four belong to Jupiter, the others orbit Saturn. Binoculars are good for seeing the moons of Jupiter. You’ll need a small telescope for Titan, and maybe something a little bit kicked up from there for the “Louisian Stars,” though nothing as grand as a research scope.

If you have that slightly kicked-up small telescope, Titan will be easy to find. Test your imagination on subsequent nights and track it in its 15-day orbit. As for the others, Iapetus will be a test of patience–it orbits beyond Titan every 79 days. The other three “Louisian Stars” will have noticeable movement in a few hours’ observing, as their orbits track full in two to four-and-a-half days.

Summing up the 17th century satellite discoveries, one has the Jovian moons discovered by Galileo in 1610 with their best visual magnitude in parentheses: Ganymede (4.6), Callisto (5.6), Io (5.0), and Europa (5.3)

Just a note on those magnitudes. Other things being equal, a human being with good eyesight can see down to about 6.5 in dark skies. Glare from planets can wash out satellites, especially when they orbit close. Also note the magnitude system is a logarithmic one. Iapetus at 11.1 isn’t twice as dim as Callisto at 5.6. It’s a hundred times fainter, as seen from an Earthling’s telescope.

How about some imaginative close-ups? There are courtesy of the Cassini spacecraft:

Something for your 3D glasses:

This close-up of Dione makes me think of our own moon, a little bit. But notice the great cliff, plus the small ones in the image: