Posted on 17 August 2008 by catholicsensibility 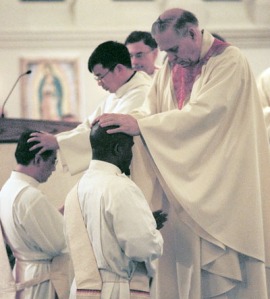 Last post on Pope Paul’s 1968 apostolic constitution, then back to liturgy. I promise. After Paul VI lays out matter and form for ordination, he wraps up the document thus:

This rite for the conferring of the sacred orders of diaconate, presbyterate, and episcopate, has been revised by the Con­silium for the Implementation of the Constitution on the Sa­cred Liturgy “with the assistance of experts, and with the con­sultation of bishops, from various parts of the world.” (SC 25) By our apostolic authority we approve this rite so that it may be used in the future for the conferral of these orders in place of the rite now found in the Roman Pontifical.

It is our will that these our decrees and prescriptions be firm and effective now and in the future, notwithstanding, to the extent necessary, the apostolic constitutions and ordinances issued by our predecessors and other prescriptions, even those requiring particular mention and derogation.

Todd lives in Minnesota, serving a Catholic parish as a lay minister.
View all posts by catholicsensibility →
This entry was posted in Ordination Rites, post-conciliar liturgy documents, Rites. Bookmark the permalink.