Posted on 20 November 2008 by catholicsensibility 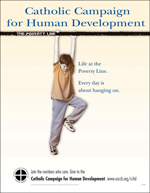 Fascinating developments, these. Angry Catholics are lining up to sink the Catholic Campaign for Human Development. Can’t stop women from having abortions. Can’t stop the doctors and medical people from performing them. Can’t stop lawmakers from refusing to legislate against it, and in turn, local authorities to police against it. Judges won’t stop activist mischief. Politicians won’t stop appointing judges. And this past month: can’t stop voters from continuing to elect politicians who promise not to make laws to stop people from assisting other people to terminate pregnancies.

Do I have that right?

The spin on this would be amusing, if it weren’t so sadsack. And typical of addictive and codependent behavior. Too many pro-lifers have latched onto the addiction of abortion. They can’t change the addicts. And heaven forbid someone would have to admit fault on their own part, so they settle for the nearest target for their anger.

Let’s concede: maybe they have something to be angry about.

Exhibit one: a lukewarm Republican party that caught a lot of blame for screwing up and sinking much public confidence in the conservative approach. Politicians, mostly majority Republicans haven’t gotten much right lately: economic crisis, Treasury, the Fed, Iraq, Afghanistan, terrorists, Katrina response. Maybe that’s not wholly fair, but competence in leadership would rise above the incompetence in both parties and get a few things done, right? Would you think?

Exhibit two: bishop backlash. As a liturgist, I’m very sensitive to the “air time” politics gets at Sunday Mass. Either you believe that all the faithful, good Catholics are going to Mass or they’re not. If they are, then why are bishops and clergy preaching to the choir onl ife issues? And if they’re not, why all the handwringing about how real Catholics didn’t elect pro-choice pols, the lapsed heretics sipping latte over the NYT Sunday crossword did.

Exhibit three: being in business used to be honorable, and now we’re facing a whole generation of jokes aimed not at lawyers, but at bankers, auto execs, mortgage providers, and FEMA. CCHD shut down grants to ACORN months ago, and despite the fact that most if not all CCHD ACORN money went to local chapters, people who chronically misspell names of bishops and political parties still want this particular party shut down. When in danger of being a punchline for a joke, punch out somebody else instead, I guess. I don’t see, despite conservative insistence to the contrary, that community organizers are going to be the target of jokes. Unless the Right cuts off all social ties with the Center and beyond. Helping people for a low to middle five-figure salary is serious work for a seriously good cause.

Exhibit four: powerlessness. It was nice while it lasted, having Republicans in control and giving lip service to abortion. The bright side is that pro-lifers can’t count on somebody else doing it for us. It will take persuasion and hard work, something a bit more than press releases and homily directives from chanceries.

If you find your parish full of boycott literature this weekend, and you’re not sure about the cause, pay careful attention to how things are being said. Misspelling isn’t a crime, but if they can’t get an acronym right, it’s more a sign they don’t care about their target and you’ve stumbled into some bad blood. Ask some questions: Is this really about the poor? How did you feel on election night?

You might consider that the bishops have already addressed concerns of the boycotters. Have you read them? If you’re inclined to withhold money from the CCHD collection, make sure you send the same amount, and perhaps with a bonus, to the local Birthright. Corollary: any web site that can’t offer an on-the-spot alternative (not their own coffers) to sending money for the poor, caveat emptor, as they say in traditionalist circles.

There are alternatives for good Catholics to consider on those exhibits above: Ephesians 4:1 and the verses that follow.

15 Responses to CCHD Under Fire