Posted on 4 April 2009 by catholicsensibility 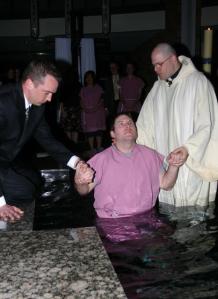 Lent marks the final stage of the catechumenate. This is where the bishop and godparents emerge from … the woodwork, say, and get cracking with their public witness.

19. The rite of election or enrollment of names (RCIA nos. 118-137) should as a rule be celebrated on the First Sunday of Lent. As circumstances suggest or require, it may be anticipated somewhat or even celebrated on a weekday.

My archdiocese is rather extended and we have many parishes. The discernment was made long ago that this rite would be observed in three or four locations around northeastern Iowa over a single weekend. The archbishop presides at two, and the others are led by episcopal vicars. (I think that practice goes back to the day when Dubuque had one or two auxiliary bishops.)

If a bishop were to choose to preside at multiple rites, I could see this being transferred to a weekday or even the prior weekend. Keep in mind the rite of election is not a Mass.

20. The scrutinies (RCIA nos. 150-156, 164-177) should take place on the Third, Fourth, and Fifth Sundays of Lent, or, if necessary, on the other Sundays of Lent, or even on convenient weekdays. Three scrutinies should be celebrated. The bishop may dispense from one of them for serious reasons, or, in extraordinary circumstances, even from two (see RCIA nos. 34.3, 331). When, for lack of time, the election is held early, the first scrutiny is also to be held early; but in this case care is to be taken not to prolong the period of purification and enlightenment beyond eight weeks.

A colleague of mine once reported that her pastor “doesn’t believe” in scrutinies and does none of them. Note that the rite places a very high value on them: only a bishop can dispense with one, and the situation must be really serious for two to be dropped. I’ll also comment that an early election strongly implies the Lenten observance begins not with the First Sunday of Lent or Ash Wednesday, but with the time of the rite of election. What that means for personal efforts in fasting, almsgiving, and prayer should be obvious for the elect. It would seem that catechists and godparents, if not the entire diocese, are also in a situation that suggests solidarity, and an early Lenten discipline.

What if a parish has only one or a very few persons, and nobody will show up for a particular Sunday for scrutiny due to schedule or such? The rite seems to lean to rescheduling at another time during Lent.

Many of my colleagues do transfer the presentations to a time near the end of the catechumenate period. One person I knew did them on Holy Saturday morning–that doesn’t appear to be a reasonable option. Note that these presentations are not slotted for Sunday, either; I’ve known a few parishes that did them right after the first and third scrutinies.

Any thoughts or comments here? We’ll get into more detail, of course, when we get to the actual rites themselves.