Posted on 1 August 2011 by catholicsensibility 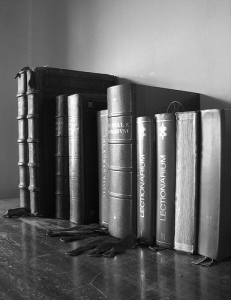 This would be a level of management yet to be seen in a spost-conciliar liturgical document:

16. As regards the decision of the Conference of Bishops for the introduction of a vernacular language into liturgical use, the following are to be observed (cf. n. 79):[16]

a) For the legitimate passage of decrees, a two-thirds vote by secret ballot is required on the part of those in the Conference of Bishops who have the right to cast a deliberative vote;

b) All of the acts to be examined by the Apostolic See, prepared in duplicate, signed by the President and Secretary of the Conference and duly affixed with its seal, are to be sent to the Congregation for Divine Worship and the Discipline of the Sacraments. In these acts are to be contained the following:

i)   the names of the Bishops, or of those equivalent to them in law, who were present at the meeting,

ii) a report of the proceedings, which should contain the outcome of the votes pertaining to the individual decrees, including the number of those in favor, the number opposed, and the number abstaining;

iii)  a clear exposition of the individual parts of the Liturgy into which the decision has been made to introduce the vernacular language;

c) In the relatio is to be included a clear explanation of the language involved, as well as the reasons for which the proposal has been made to introduce it into liturgical use.

Todd lives in Minnesota, serving a Catholic parish as a lay minister.
View all posts by catholicsensibility →
This entry was posted in Liturgiam Authenticam, post-conciliar liturgy documents. Bookmark the permalink.