Posted on 18 November 2011 by catholicsensibility

My family might shudder, and my staff colleagues may worry, but it’s time to consider the next musical project. It’s only been five days since strike, and already I’m itching to get back to the task.

Susanna: The pros are that it’s a great story, and that I can freely borrow from the Psalter and other parts of the Bible. My thinking is to adapt Proverbs 31:10-31 for the first song, splitting it in two. The first part will be sung by a women’s chorus, and the second by husband Joakim. I’ve already scanned the Psalms for supplemental material, including the 17th for a song for Susanna under suspicion, and a lament for Joakim here:

For it is not an enemy that reviled me –
that I could bear –
Not a foe who viewed me with contempt,
from that I could hide.
But it was you, my other self,
my comrade and friend,
You, whose company I enjoyed,
at whose side I walked
in the house of God. (Psalm 55:13-15)

Psalm 9 would make a great finale. No question.

The challenge is how to manage a reconciliation of Susanna with her disbelieving husband. It strains belief for a modern audience that people who would turn on her so easily would find themselves in her good graces very soon after her vindication. But perhaps I overthink this. 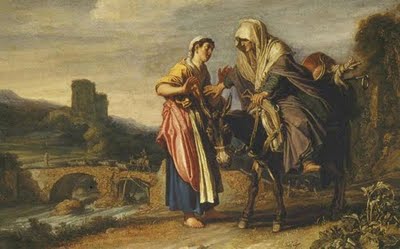 The cast suggested I try Ruth, which I outlined a number of years ago just for this eventuality. I returned to work on it a bit last night, and I found it a little deeper and richer than I did earlier. Supposedly, it precedes the psalms, so supplemental material to flesh out the songs will have to come from the Torah or from my own imagination. One of the students quizzed me on how I would handle Ruth going to Boaz’s bed. Honestly, I said.

I was thinking of trying my hand at an opera, but I think I’ll save Saint Paul for another year.

Another friend suggested Esther. But the VeggieTales version is still in my head. Judith, on the other hand …

Speaking of alternate versions, I finally gave a listen to the other musical based on the book of Tobit. Two nice high school performances came up when I did a YouTube search for “Tobit the Musical.” I knew of this piece when I lived in Kansas City, but I intentionally avoided a listen until today. An interesting idea to treat Tobit’s charity to the dead as an obsession. A lot more dialogue than in my version. From the audio clips on cd baby, I think I utilize more jazz, blues, and way less C&W influences.

Todd lives in the Pacific Northwest, serving a Catholic parish as a lay minister.
View all posts by catholicsensibility →
This entry was posted in Music, Scripture. Bookmark the permalink.

1 Response to The Next Project