A House Safe From Fear?

Posted on 29 May 2012 by catholicsensibility 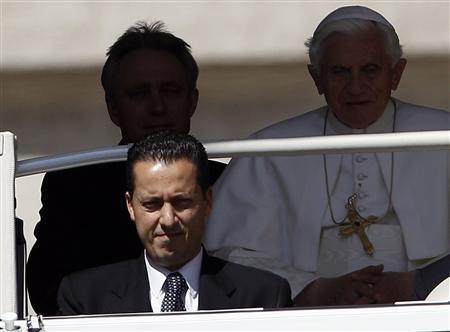 They say to God, ‘Leave us alone!
We do not desire to know your ways.
What is the Almighty, that we should serve him?
And what profit do we get if we pray to him?’
Is not their prosperity indeed their own achievement?
The plans of the wicked are repugnant to me. (Job 21:14-16)

This is naturally something that can hurt the Church, and put trust in it and the Holy See to the test.

The bigger test has come and not been passed. But that’s not to say a wounded body can’t be injured further. It might be that an initial scandal will be compounded with lies and cover-up. They could consult with Americans Bill Clinton and Robert Finn to see how that meme plays out in the long run. I’d say that many people are already embittered over the handling of moving sex predators from one community to another. Laundering money may well be the Church’s next big scandal.  But putting children in harm’s way is about as bad as you can get.

One Italian newspaper quoted a “leaker” who wasn’t a butler:

There are leakers among the cardinals but the Secretariat of State could not say that, so they arrested the servant, Paolo, who was only delivering letters on behalf of others.

I categorically deny that any cardinal, Italian or otherwise, is a suspect.

This has the ring of truth. In order to be a suspect, one has to be under active investigation by authorities. It might be that no cardinals are under investigation. Yet. Or otherwise. I suppose if one can direct one’s own newspaper,  L’Osservatore Romano to ignore the story, confining the investigation to scapegoats shouldn’t be hard.

This scandal may play out big time in Italy and in the rest of Europe. I don’t think it will be a big concern in the US. First, we have direct experience of corporate CEO’s and big-time bankers trashing the American economy and getting away scot free. They’ve managed to pass the blame to Democrats and people who got duped on predatory loans. Cardinal Bertone only has to pass the Karl Rove Class in Poiliticla Dodgery and if a butler and a few sisters get thrown under the bus, at least it’s not his back with the wheel tread.

Second, Rome is a long way away for domestic-focused Catholics. As long as the pope “continues on his path of serenity, his position of faith and morals that is above the fray,” then faithfulCatholics will keep funding investigations and posh retirements.

Third, I think a lot of us who do have a sense of a universal Church, and recognize that this is an important scandal, have been hardened by recent experiences. This can go one of two ways: business as usual or a twisted sense of entertainment. Neither option does much for our spiritual lives. Some say God is alert to the wicked, but Job takes issue:

Why do the wicked live on,
reach old age, and grow mighty in power?
Their children are established in their presence,
and their offspring before their eyes.
Their houses are safe from fear,
and no rod of God is upon them. (Job 21:7-9)

Todd lives in Minnesota, serving a Catholic parish as a lay minister.
View all posts by catholicsensibility →
This entry was posted in Church News, Scripture. Bookmark the permalink.

8 Responses to A House Safe From Fear?