When we think of women mystics in Germany, we so often think of Hildegard of Bingen – for good reason. Her fame has spread, especially in recent years. In 2012, Pope Benedict XVI named her a Doctor of the Church. However, her contemporary, Saint Elizabeth of Schönau is another worthy women to consider. Born in 1129 to a family with both ecclesiastical connections and wealth. At age 12 she entered Schönau Abbey, a dual community with men and women. It was here that she became educated. 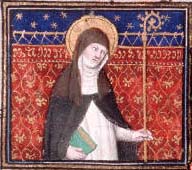 As a young adult, she began to experience ecstasies and have visions. Her abbot at the time indicated that these should be written down, and so they were. Her visions included Mary, the Mother of God, angels, and various saints. Apparently during her visions she received answers to theological questions, which at some point were prompted by questions given to her by others. She received prophetic messages as well. Her brother Ekbert eventually entered Schönau abbey himself, and before becoming abbot himself, he was directed by the abbot to become his sister’s secretary and editor.

Elizabeth did correspond with, and once visited her friend, the aforementioned Hildegard. While the two women had many similarities, they were very different. In the end Elizabeth left behind far more manuscripts than Hildegard, or other women of the time, and some of their correspondence remains extant. During their lifetime, it was Elizabeth that was well known, even though it seems that Hildegard has gained the status and long term notoriety.

“The Book of the Ways of God” was Elizabeth’s most important manuscript, and one that became quite well-known, offering a book of visions and sermons spanning about 14 months time. Recently I read that she wrote about having a mission to “warn Christians, including many priests and bishops, to repent of their sins.”* Her strong words are what made her stand out as a worthy woman to me. In a letter sent to three different German bishops she said, “Read and hear the divine admonitions and receive them with a peaceful mind. Do not judge that they are the figments of women, because they are not. Rather, they are from God the omnipotent Father, who is the fount and source of all goodness.”

Elizabeth was never formally canonized, but was popularly affirmed as a saint at the time of her death, and a saint she remains.

Pilgrim, writer, speaker, retreat director, social media minister, church secretary - it's hard to believe I was once a corporate executive, but I was. Married to an incredible man, have a spectacular stepdaughter, dog and cat.
View all posts by Fran Rossi Szpylczyn →
This entry was posted in Fran Rossi Szpylczyn, Guest Writers, Saints, Two Weeks of Worthy Women. Bookmark the permalink.