Posted on 21 July 2014 by catholicsensibility 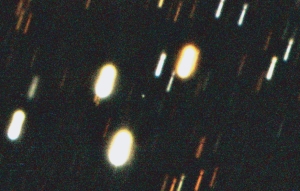 When I saw this development–the target of the space probe Rosetta is a double comet–I wondered if this will make landing the probe more difficult. Then I thought about this celestial body, Comet 67P/Churyumov–Gerasimenko. Will one lobe get named Churyumov and the other Gerasimenko?

Svetlana Ivanova Gerasimenko took the photograph, above. Klim Ivanovych Churyumov found the comet on the 1969 picture.

Todd lives in Minnesota, serving a Catholic parish as a lay minister.
View all posts by catholicsensibility →
This entry was posted in Astronomy and tagged comet, Comet 67P/Churyumov–Gerasimenko, Rosetta. Bookmark the permalink.