Before the Big Bang, There Was a Cosmic Egg

Posted on 6 August 2014 by catholicsensibility 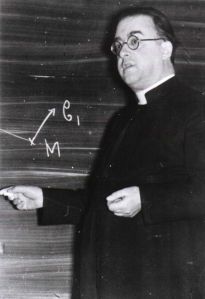 The twentieth-century Belgian priest and physicist lends his name to the European supply ship for the International Space Station.

He should be more famous, as he developed many of the explanations that describe the expanding universe.

Msgr. Lemaitre’s calculations suggested that the cosmos began as a super-dense “primeval atom” that underwent some type of reaction that initiated the expansion of the universe which continues today. His ideas were refined by other cosmologists, leading to the Big Bang theory on how the universe was born.

The Cosmic Egg is how he termed the pre-expansion state. A piece of astronomy trivia: the “Big Bang” was a pejorative leveled against the notion of a universe coming into being from nothing. In the 1950’s, the “Steady State” theory still convinced many astronomers, and its critics were sometimes vehemently opposed to dissent. The “Big Bang” stuck.