Posted on 31 August 2014 by catholicsensibility

Western European readers, you don’t have much time to catch this, but the moon crashes a close visual encounter with Mars and Saturn after sunset tonight in the southwest. Amateur astronomer Bob King has a nice blog post at Universe Today, whether you are just using your unaided eye, or can scare up binoculars or a small telescope.

That’s one of the great things about astronomy: you can do as deep as you like. You can just marvel at the movement of the moon and planets against background stars. The constellation Scorpio is to the left of the Mars-Saturn-Luna trio. It leaps off the comics page of the local newspaper and becomes a real association of stars that suggested “scorpion” to the ancient Greeks. Its brightest star was named for being close in color to the red planet, which the Greeks, as you know, associated with Ares, their god of war. Hence Antares.

Antares is one huge star. Check the comparison in this illustration from wikipedia: 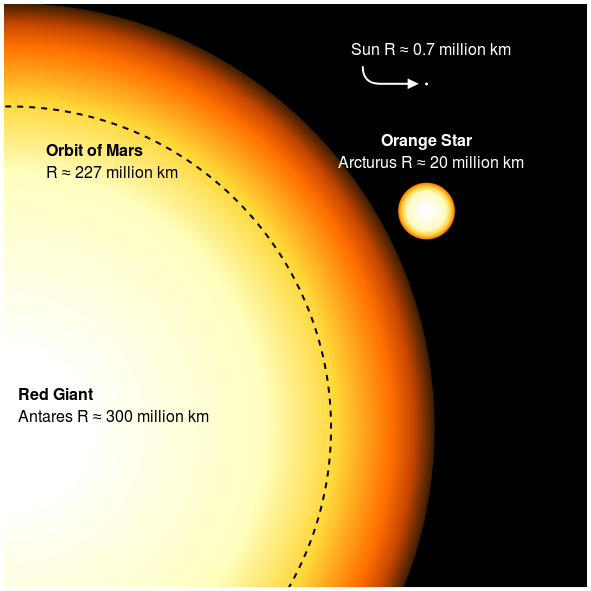 With binoculars, you can make out four ancient basins on the moon–dark patches from asteroid impacts four billion years in the past. The Sea of Tranquility: you know what that’s famous for, right? About now, the sun is shining low in the sky where Neil

Armstrong’s and Buzz Aldrin’s footprints spot the landscape around the first human “base” on the moon. The Sea of Crises–the small round one near the moon’s limb–that was where the Soviets landed their last probe in 1976.

And if you’re going telescope-deep tonight. Mr King has some great targets for you to spot and ponder, including an old crater named for a Benedictine abbot and mathematician. It’s the crack of dawn on the moon at Maurolycus.