On My Bookshelf: Nancy Kress

Posted on 19 September 2014 by catholicsensibility

Nancy Kress is not your usual science fiction author. Like others, she pops a big idea into her stories, then see where it leads the characters. In almost everything I’ve read from her, she looks deep within the person and explores those relational aspects that are quite human, but somehow are challenged, altered, or create obstacles as her character struggles to make sense of something beyond ordinary experience.

Whenever I see “Nancy Kress” in a short story anthology or in a magazine, it’s usually the first thing I read. I never skip her short fiction.

Her ideas involve hard science, but the treatment is not cold and aloof. In the author’s own words, from an online interview:

I don’t want to call (what I write) hard SF, I think I’ll borrow a term from Michael Swin and say that I write high-viscosity SF. Because again the genetic engineering revolution is so fascinating to me that I move into it, trying to get the science as right as I possibly can. But the characters to me are still to me the most important thing, because science happens to people, because if science falls in the forest and there’s no one around, does it make a sound? I don’t think so.

My favorite work of hers involves “Beggars.” She expanded an award-winning novella in the 90’s and created a three-book tale of people genetically engineered to not sleep. And to be high performers in life. Ms Kress admits the series takes totally opposite ideas, like from Ayn Rand and Ursula LeGuin, and sees what happens when you mix up people who are either meritocrats or communists. There’s no in-between. So sparks fly.

Less successful, I think, is a short novel, her latest, Yesterday’s Kin. Oh, it’s quite readable, but I didn’t find it satisfying as other books she’s written. Genetics is still a Nancy Kress mainstay. At first, the story appears pedestrian: aliens land in New York. The solar system, in its wanderings through the galaxy, is about to pass through a mysterious cloud that has killed these aliens and, presumably, will kill everybody on Earth. So it’s time to band together and help each other out.

The story is told mainly from the point of view of a single mother of adult children. The children are extremes. The two elder siblings are opposites and argue all the time. They provide voices for extremes of present-day politics–instead of Rand and LeGuin, it’s treehuggers and military isolationists. Sibling #3 is a slacker–nobody likes him.

Mom herself is high-strung, highly driven, and a key player in the human-alien cooperation effort. 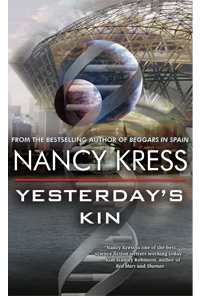 Yesterday’s Kin failed to deliver for me. It’s a quick and easy read, and I was curious about what was going to happen. The drug addiction of the younger son was more a distraction than a real contribution to the story, though it drives the reason why he consents to being “abducted” by the aliens in the end.

There is a key event in human history, the moment about 70,000 years ago when we went through a population “bottleneck,” from which only a few thousand people survived. When the author first mentions it through her character, Marianne, I thought, ah! that’s where we’re going with this. It was like my wife’s feeling when she’s figured out a mystery and there is still half a book or another half-hour of tv to go.

The alien reveal mid-book is a surprise, but it leaves some questions hanging in space. The aliens, of course, are not what they seem to be. They take some measure of pride in being advanced, strutting amongst the stars, helping out the poor stepchildren of the galaxy, the humans. But they turn out to be as petty and self-centered as anybody else on Earth. All too human, as it turns out.

189 pages–not a long read. Maybe just a little too long. The character conflicts are not subtle–I seem to remember her other fiction being more subtle about it. Maybe in the mainstream culture, people are presented as being extremists. In this book, I have a very non-PC urge to slap the people. I don’t care about their politics. As a reader, I didn’t care for them at all.

I would start with the best of Nancy Kress: her short fiction and Beggars In Spain.

1 Response to On My Bookshelf: Nancy Kress