DPPL 174: The Immaculate Heart of Mary

Posted on 29 December 2014 by catholicsensibility 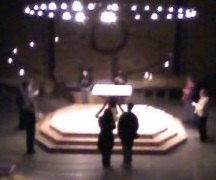 If believers looked to the heart of Jesus, you know that the love of his Mother would also be very much in the Christian imagination:

174. The Church celebrates the liturgical memorial of the Immaculate Heart of Mary the day after the Solemnity of the Sacred Heart of Jesus. The contiguity of both celebrations is in itself a liturgical sign of their close connection: the mysterium of the Heart of Jesus is projected onto and reverberates in the Heart of His Mother, who is also one of his followers and a disciple. As the Solemnity of the Sacred Heart celebrates the salvific mysteries of Christ in a synthetic manner by reducing them to their fount -the Heart of Jesus, so too the memorial of the Immaculate Heart of Mary is a celebration of the complex visceral relationship of Mary with her Son’s work of salvation: from the Incarnation, to his death and resurrection, to the gift of the Holy Spirit.

Twice we are reminded of the liturgical differences: Solemnity and memorial. We are told Fatima sparked a widespread devotion to the Immaculate Heart:

Following the apparitions at Fatima in 1917, devotion to the Immaculate Heart of Mary became very widespread. On the twenty-fifth anniversary of the apparitions (1942) Pius XII consecrated the Church and the human race to the Immaculate Heart of Mary, and extended the memorial to the entire Church.
In popular piety devotions to the Immaculate Heart of Mary resemble those of the Sacred Heart of Jesus, while bearing in mind the distance between Jesus and his Mother: consecration of individuals and families, of religious communities and nations (Among the the various consecrations to the Immaculate Heart of Mary, one of the most important is that of Pius XII’s consecration of the world to the Immaculate Heart of Mary on 31 October 1942 (cf. AAS 34 [1942] 318), which was renewed by John Paul II, in communion with the bishops of the Church, on 25 March 1984 (cf. Insegnamenti di Giovanni Paolo II VII/1 [1984], Libreria Editrice Vaticana, Città del Vaticano 1984, pp. 774-779)); reparation for sins through prayer, mortification and alms deeds; the practice of the First Five Saturdays.
With regard to receiving Holy Communion of the Five First Saturdays, the same as has been said in relation to the Nine First Fridays can be repeated(Cf. DPPL 171): overestimation of temporal factors should be overcome in favor of re-contextualization the reception of Holy Communion within the framework of the Eucharist. This pious practice should be seen as an opportunity to live intensely the paschal Mystery celebrated in the Holy Eucharist, as inspired by the life of the Blessed Virgin Mary.

The same cautions apply to this devotion as do First Friday. Remember, the Directory on Popular Piety and the Liturgy is online at the Vatican site.

Todd lives in Minnesota, serving a Catholic parish as a lay minister.
View all posts by catholicsensibility →
This entry was posted in Directory on Popular Piety and the Liturgy, post-conciliar liturgy documents. Bookmark the permalink.