Posted on 31 August 2015 by catholicsensibility 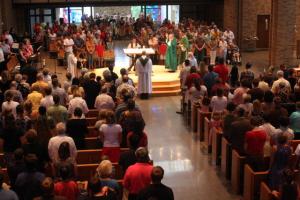 We conclude our examination of Cardinal Robert Sarah’s June 2015 essay for L’Osservatore Romano. In the previous paragraphs, he spoke of the need for unity. Here, he picks up on the mainstream/traditionalist divide:

In this regard, it is necessary that some should celebrate according to the “usus antiquior” [older usage] and should do so without any spirit of opposition, and therefore in the spirit of Sacrosanctum Concilium. Similarly, it would be a mistake to consider the Extraordinary Form of the Roman Rite as coming from some other theology which is not that of the reformed liturgy. It would also be desirable in a future edition of the Missal to insert the penitential rite and the offertory of the “usus antiquior” for the purpose of emphasizing that the two liturgical forms illuminate each other, in continuity and without opposition.

We know, of course, that a mutual enrichment would be less palatable on the traditionalist side. Aside from a weaker articulation of Catholic theology, the distrust of any sort of reform indicates a deeper unwillingness to engage in conversion. The 1570/1962 Missal is seen in details as some edifice of perfection. No Missal is perfect, except in God’s action in the sacramental rites and in the proclamation of the Word. Perhaps the rites themselves reflect theology at least adequately, but the human application of theology is sorely lacking.

If we live in this spirit, then the liturgy will stop being a place of rivalries and critiques, so as finally to make us participate actively in that liturgy “which is celebrated in the holy city of Jerusalem toward which we journey as pilgrims, where Christ is sitting at the right hand of God, a minister of the holies and of the true tabernacle” (no. 8).

As a final hope, this is honorable enough. But we live in a Church that has fostered critique in its formal documents and official practice for a few decades now. Cardinal Sarah should perhaps look to the CDWDS which he heads for some leadership on this issue.

Todd lives in Minnesota, serving a Catholic parish as a lay minister.
View all posts by catholicsensibility →
This entry was posted in Liturgy and tagged Cardinal Sarah, reform2. Bookmark the permalink.