Posted on 2 September 2015 by catholicsensibility 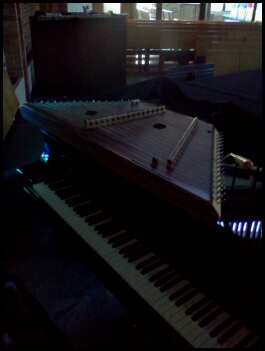 As a player of plucked and hammered instruments, I have yet to encounter a plainsong melody that doesn’t work wonderfully well on these. Voices, yes, of course are optimal. But there is something about plainsong on an instrument like the hammered dulcimer and its sustained tones that works for me. It might just be my long affinity for the instrument.

I’m finding just a select few people in my new parish exposed to plainsong. But one couple I met with recently raised the issue. They settled on a choir piece and a solo for the prelude. But In Paradisum came up, and they decided I would play it on hammered dulcimer.

As I was preparing a score this afternoon, I was thinking back to the last time I played it–at another funeral back at the campus parish. One elderly couple were especially fond of chant, and on the occasions I pulled something out for Mass or Reconciliation, they would often comment on it. They always knew the tune, which probably says more about my limited repertoire of twenty-something than anything else.

Todd lives in Minnesota, serving a Catholic parish as a lay minister.
View all posts by catholicsensibility →
This entry was posted in Music and tagged In Paradisum. Bookmark the permalink.

3 Responses to In Paradisum