On My Bookshelf: Theology of Christian Marriage II

Posted on 27 September 2015 by catholicsensibility 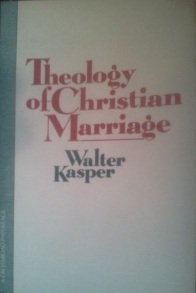 In the introduction to his Theology of Christian Marriage, Walter Kasper cites the “very close connection between the order of creation and the order of redemption in marriage.”

My paraphrase would be that the former is how God made us, and the latter is how God saves us. Cardinal Kasper’s premise is to start with “the human sciences (medicine, psychology, sociology, cultural anthropology, ethnology, and so on) have to say about marriage.

Is this starting point somehow biased against the redemptive aspect or giving a privileged place to the human intellect? Not quite.

This does not mean that the theology of marriage can be reduced to a number of anthropological statements, or that it should be adapted to anonymous pressure of the modern social consciousness. Such an adaptation would certainly not further Christian freedom, which, in the imitation of Jesus, always calls for courage from Christians so that they can to some extent be nonconformists.

This passage is illustrative of this theologian’s approach. It seems that some of the more excitable rigorists overstate the case for pandering or disloyalty or the collapse of theological tradition. It also seems one extreme position would be a refusal to examine the possibility of reform just because the institution is in crisis. The other would be total concession to modern human practice. Clearly, neither of those is espoused by Cardinal Kasper or other mainstream theologians.

Note also that the result of this is a community of Christians living in the world, but not conformed to it. It seems like everybody on the front lines of this discussion is advocating a position apart from modern human culture.