Posted on 26 December 2015 by catholicsensibility 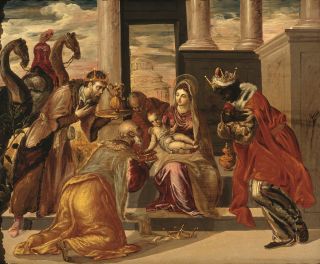 Devin and Liam’s comments about “WCIT” brought to mind an issue of certain Christmas songs. One concern voiced about singing “Wood of the Cradle” at my parish was a third verse that mentioned the magi. “That’s why we never learned it,” I was told “And we skipped to verse four,” I was told. We learned the missing verse’s arrangement and sang it for the Nativity.

I’m not as fussy about mentioning “kings” or “magi” or even that magic, but unbiblilcal number of “three” at the end of a year. But I usually save songs that mention Mary until the January 1 observance.

That said, one of the choir members mentioned that we “had” to do “Child of the Poor” this season. I agreed. It made the “midnight” (really 10pm) line-up for preludes. And it will get another appearance later this season. Unlike the most famous set of lyrics of its partner song, it doesn’t mention those visitors in Matthew’s gospel.

I can name-drop with Liam this Christmas–Scott Soper was my neighbor in the northwest suburbs of Chicago for a year or two. I have pre-published maniscripts of a handful of his songs in my files. We had a one-on-one exchange of early works when we were in adjacent parishes. Not this song, though. It has escaped my notice for its two decades in print. It’s a good text, and I like it a bit better than the most famous contemporary Christmas partner piece.

When I was younger, I might have sniffed at songs that mentioned “three” and “kings,” but I don’t get really bothered by those oriental visitors getting numbered and gentrified. Any other Christmas text bugaboos come to mind?

Todd lives in the Pacific Northwest, serving a Catholic parish as a lay minister.
View all posts by catholicsensibility →
This entry was posted in Christmas, Liturgical Music. Bookmark the permalink.

1 Response to Early Singing About Magi