On My Bookshelf: Hamilton and Sondheim

Posted on 28 January 2017 by catholicsensibility

For now, I live at least a half a continent away from the performances. As a consolation, the soundtrack is greatly enjoyable. And nearly so is this book, which arrived from Amazon last summer.

Having a readable libretto is nice; some of the rapid-fire rap on the cd is barely intelligible. Reading also deepens my admiration for the complexity and cleverness of the musical.

My first instinct on Hamilton was not to bow to the pressure of that particular corner of media hype. After all, when is it news that supporting cast singers will perform at the Super Bowl? (How’s that for a mish-mash of American pop culture?) But I’ve given in. The musical is just too good. And I find I’m getting too many good ideas–not slavish plagiarism, but just illustrations and advice on how to construct songs and scenes and move musical things forward. Already I’d like to do things differently with the already-written, but life’s too short to look back. 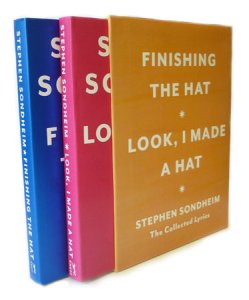 The book reminds me of Stephen Sondheim’s 2011 Hat Box, a gracious and generous gift from a blogosphere friend. It seems to have inspired Hamilton’s creator to write up his Broadway cultural phenomenon. Actually I’ve only begun to crack Hat Box, but I perceive the imitation/flattery in the later work.

Intertwined with his genius lyrics, Mr Sondheim peppers his book with advice for songwriters. I feel as if I’m an in advanced class in theatre every time I open the pages.

I don’t know how many songwriters are reading this blog these days, but my suggestion is to stop reading here and get one or both of these books. And even if you just like the shows, these books would get my highest recommendation for the year.

Todd lives in Minnesota, serving a Catholic parish as a lay minister.
View all posts by catholicsensibility →
This entry was posted in Music, On My Bookshelf. Bookmark the permalink.