Pope Francis Address to CELAM 8: A Sacrament of Unity

Posted on 26 October 2017 by catholicsensibility 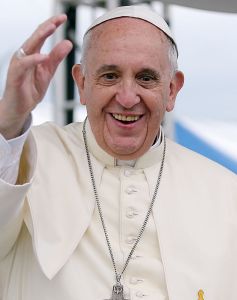 We’re about halfway through the address of the Holy Father to his brother bishops of Latin America last month. Some typical language from Pope Francis, colorful and thoughtful on the sins of the Americas:

A Church able to be a sacrament of unity

What lack of focus we see all around us!  I am referring not only to the squandering of our continent’s rich diversity, but also to a constant process of disintegration.  We need to be attentive lest we let ourselves fall into these traps.  The Church is not present in Latin America with her suitcases in hand, ready, like so many others over time, to abandon it after having plundered it.  Such people look with a sense of superiority and scorn on its mestizo face; they want to colonize its soul with the same failed and recycled visions of man and life; they repeat the same old recipes that kill the patient while lining the pockets of the doctors.  They ignore the deepest concerns present in the heart of its people, the visions and the myths that give strength in spite of frequent disappointments and failures.  They manipulate politics and betray hopes, leaving behind scorched land and a terrain ready for more of the same, albeit under a new guise.  Powerful figures and utopian dreams have promised magic solutions, instant answers, immediate effects.

The Church offers something different:

The Church, without human pretensions, respects the varied face of the continent, which she sees not as an impediment but rather a perennial source of wealth.  She must continue working quietly to serve the true good of the men and women of Latin America.  She must work tirelessly

No lasting construction in Latin America can do without this unseen yet essential foundation.

North of the Mexican border, these tireless efforts are largely outside of the mainstream culture. It might seem that the so-called indulgence for political correctness has taken over, but that’s just an illusion, as seen by various cultural events like #metoo. World culture is very much about divisions, boundaries, sound-proof walls, the wealthy, a dialogue of the deaf, and a growing militarism. Some Latin American nations have done better with reconciliation, justice, and non-violent solutions to problems. Others, not so much.

Todd lives in the Pacific Northwest, serving a Catholic parish as a lay minister.
View all posts by catholicsensibility →
This entry was posted in evangelization and tagged CELAM, pope francis. Bookmark the permalink.