Posted on 3 December 2017 by catholicsensibility

One of the seasonal tussles of which we see less in some circles thanks to the war on the war on Christmas is over the proper colors for decorations.

As most every Catholic knows, before December 24th evening the right color is somewhere between red and blue on the color wheel. With one Sunday of a color between pink and light grayish-red.

I think a purple with more blue than red alerts us to a somewhat different character of Advent from Lent. Unlike some of my colleagues, I don’t get bent out of shape about blue nor do I feel the need to advocate for it. I wore a lavender/white striped shirt to church today with a blue, green, and red tie slightly suggestive of the 25th of this month. Same tie I wore on my wedding day, btw.

Secular Christmas overtakes this, as we know. In the process of selling product, things are decorated red and green now, with a bit of blue. I know, I know: traditionally green is the color of eternity or viridity or the only outgrowths from tree branches in the Northern Hemisphere. As a liturgy geek, I get used to it during more ordinary times of the year.

Red is associated with Santa Claus. I don’t know if St Nicholas was a cardinal–probably not. He was a bishop. And he did spend time in jail at one point. But I don’t think he was technically a martyr.

White is usually cited as the liturgical color of Christmas. Metallics, silver and gold, seem to have some presence in clergy vestments. I suppose a bit of red or green trim might be okay. In my mind’s eye, I could see a white vestment with red, green, gold, and silver highlights. Maybe a bit much, but Nativity is a feast for indulgence if any liturgical observance is. 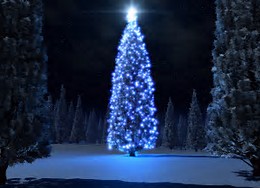 Blue as a Christmas color. I saw this mentioned on a secular website. When I was watching one of those Christmas romance movies with my wife last night, the guy had a scene in a goshawful blue sweater. He was in love, so he didn’t care.

Todd lives in Minnesota, serving a Catholic parish as a lay minister.
View all posts by catholicsensibility →
This entry was posted in Advent, Christmas. Bookmark the permalink.