Posted on 29 March 2018 by catholicsensibility 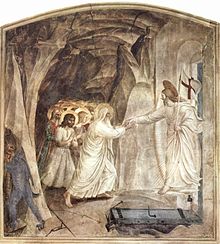 A few of my Catholic Right facebook friends and their contacts are in Aha! We-Told-You-So ecstasy with reports that Pope Francis has denied the existence of hell. First, I’m not sure the power of the keys extends to supernatural realms. Second the “interviewing journalist” is in his tenth decade of life. Third, the Vatican was pretty quick in a busy week to refute the story. Make of all that what you will.

My sense is that this is what various players hope he said. An atheist simply wants to disappear into the void when he dies. Orthosplainers want Easter egg on the guy they dislike. This looks like an easy one to diagnose.

All that said, what lies beyond mortal death is a mystery. It is a personal mystery in the sense of how individuals might be judged and where they will move beyond that. It’s a meta-mystery in that we don’t know place, time, conditions, activities, and such.

One priest friend of mine imagines each soul being given a significant chunk of the universe to enjoy and steward–a galaxy or such. He’s kind of an introvert, so I think billions of cubic light years for a dwelling place might well be a heaven.

Pop culture remains fascinated about the final things. I don’t think hell is going to get killed off anytime soon. Billy Joel, in singing about Virginia, mused:

Human attitudes about the afterlife are far more intriguing as to what sorts of paths lead to heaven. Catholics who are obsessed about what other Catholics may or may not think aren’t really on the path that leads anywhere but in circles. Nothing that attends to the various mandates we’ve been given for action: take and eat and drink, serve as I have served, proclaim the Gospel everywhere, attend to the least persons.