Posted on 12 July 2018 by catholicsensibility 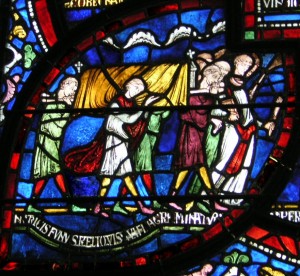 Well over seven years ago, we blogged on section 347 of the Order of Christian Funerals (OCF). A whole passel of texts sit there outside the Lectionary proper, which, according to the Church, may be “chosen for use in various places within the rites.”

Psalms here are given as a whole, which leads me to think this section was designed more for the Mass Propers or the Office of the Dead. Still, when given permission to use some rich texts from the Psalter for any funeral liturgy, including the Mass, I might say, “Why not?”

Scripture scholars categorize the ninety-third Psalm as “royal.” Along with Psalms 95 through 100, these texts emphasize the divine power and God’s ultimate authority in the universe. Christians have used these texts to celebrate and worship Jesus–note the use of Psalm 95 as a daily invocation of God’s power, and the deployment of the next three psalms for the Liturgy of the Word through the four Masses celebrating the Nativity.

Some of the antiphons given in OCF 347 are new to those who follow the Lectionary Psalms more closely. But this text is intriguing:

From clay you shaped me;
with flesh you clothed me;
Redeemer, raise me on the last day.

After placing the power of Christ squarely in the believer’s trust, the entire text of the Psalm is given:

The world you made firm, not to be moved.
Your throne has stood firm from of old.
From all eternity, O Lord, you are.

Greater than the roar of mighty waters,
more glorious than the surgings of the sea,
the Lord is glorious on high.

Truly your decrees are to be trusted.
Holiness is fitting to your house,
O Lord, until the end of time.

This is the text given in the OCF. It’s the old Grail translation–the new version differs on just a word or two. One difference is the replacement of “floods” in the third stanza/verse above for the old “waters” given in the 1989 edition of the rite. Some Scripture scholars think it may have been a reference to the Genesis flood. Others might suggest the greatest powers of nature praise God through their very expression–only to be overshadowed by the glory of God. That’s not a trivial point in the interpretation of this text for a funeral liturgy.

In our modern perspective, perhaps death is the most feared “power” in the universe. We dodge death, we defy it, run from it, alter ourselves to convince we are still young and death is still far off.

Science tells us that planets, stars, and galaxies–much bigger things than any of us–will all die. And compared to these heavenly bodies, what is a single human being? Sometimes life is taken from us with violence. Sometimes with an inevitable, quiet, and excruciating delay. Does God over power that? Faith tells us so.

Perhaps that antiphon is not so out of place. Do we trust it? Do we have confidence we will join the Lord before the “end of time”?

Todd lives in Minnesota, serving a Catholic parish as a lay minister.
View all posts by catholicsensibility →
This entry was posted in Order of Christian Funerals, Scripture. Bookmark the permalink.