Posted on 30 July 2018 by catholicsensibility 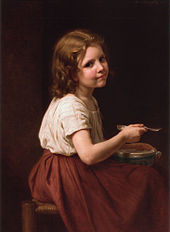 Many St Blog’s Catholics were preparing to duck, or plug in the headphones during yesterday’s homily, in case it touched on the so-called “miracle of sharing.” If this theme is anywhere near as common as reported, perhaps it rivals another tiresome notion–that the criticism of this citation from an older preacher is itself exhausting in its commonality.

The Saturday homilist at my parish preached more on the leftovers. So there’s that. I don’t think I’ve heard a miracle-of-sharing homily since my college days.

All that said, I’m not sure the concept of a miracle of sharing is rooted in laziness any more than other cultural images are: Santa kneeling at the manger, taking a nail home for Lent, weaving palms into crosses, a wedding is three people, etc..

Familiarity can be a virtue. Personally, I might wish for something more than a 30th funeral appearance of a song this year. But for the newly grieving, it may have a context beyond my assessment of being a leftover from last week’s funerals.

It’s also important to note that a miracle-of-sharing homily is pretty close to the fable of Stone Soup, and for kids and even the occasional adult, it can be a familiar touchstone for the concept of eliciting generosity from the selfishly disinclined. I would certainly expect my conservative Catholic friends to advocate for the elimination of a vice.

On the other hand, maybe so many Catholic preachers have a sense that generosity is not a strong virtue in their parishes. Reinforcing it with an old story about sharing is an easy out for a warm and leisurely summer–when it seems to come up most often.

Todd lives in Minnesota, serving a Catholic parish as a lay minister.
View all posts by catholicsensibility →
This entry was posted in Commentary, Liturgy. Bookmark the permalink.