On Shelf And Screen: Ursula LeGuin

Posted on 7 August 2018 by catholicsensibility 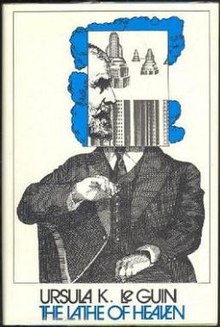 First, I reacquainted myself with The Lathe of Heaven. The novel was made into a tv movie in 1980. It’s interesting that as filmmaking was getting more into special effects, somebody decided to explore a story that was more about exploring the interior of its main character. Maybe it’s no coincidence that Star Wars peaked in 1980 with Luke and his father and has been in decline since with the weird, the cute, and the lack of introspection.

Today’s producers could do far worse than taking intelligent material from acclaimed science fiction writers and adapting for the screen, big and small. There is only so much saving the world that can be borne before the big movies become the next exercise in interbreeding boredom and explosions. The best science fiction is the insertion of humanity into a single unfamiliar idea. Not the race for the most amazing settings. There’s a reason for the excitement about Jean-Luc Picard returning as a tv character. It’s about the character. Not necessarily the Trek.

Two, I enjoyed a recent read, Four Ways to Forgiveness. This is a collection of four novellas that interlink in characters as the author explores old concepts–slavery, freedom, and gender issues–in a far future on distant planets. Characters grow and develop and the narrative stretches across some of their lifetimes.

The stories that delve deeply into slavery are difficult, even as people make their way toward freedom. Poignant are the narratives that involve love between men and women. Childhood sweethearts do not live happily ever after, and people find fulfilling companionship, but only after some difficult journeys and missteps.

Todd lives in Minnesota, serving a Catholic parish as a lay minister.
View all posts by catholicsensibility →
This entry was posted in film, On My Bookshelf, science fiction. Bookmark the permalink.