The GMO’s Among Us

Posted on 9 January 2019 by catholicsensibility

A human being who can digest dairy is a GMO. If you are one of these, your digestive tract can make something healthy for you from that milk sugar molecule on the right.

This article sums up something I read last summer in a book that explored how human beings have evolved over the past several millennia. It tickled my memory after seeing something on facebook that attempted humor across the lines of vegan, lactose intolerance, and mainstream milk drinkers.

I will confess upfront: as a child I was a milk junkie. Plain white whole milk, please. My brother and I stashed the half-gallon jugs in the back of the fridge because we liked our drink those few extra degrees closer to freezing. Slightly warmer (but still cold) milk was better for cookies and cake. My youthful science mind was ignorant that I was the end product of genetic modification: the journey from lactose-intolerant hunter-gatherer to sedentary post-agriculture mammary junkie.

During the rise of agriculture in the Near East at about 11,000 years ago, we see that sheep, goats, and cows were among the earliest animals domesticated. … As all mammals produce milk, this led to early agricultural villages having now far greater dairy resources naturally available. Initially, very likely dairy would not have been easily consumed by adults and perhaps even avoided; however, genetic mutations naturally show a very small percentage of the human population would have had alleles or groups of genes that allow for the consumption of dairy later in life
…

With greater availability of milk in early settled societies, the advantages of having a high caloric product that has calcium and fats that are beneficial became a greater selective pressure for human populations. The genes that (permitted digestion of dairy) became selected for or gave advantages to (those who could over those who could not.) The fact that milk was utilized very early in the Near East has meant that populations there do show a relatively high ratio of lactose persistence in adulthood. 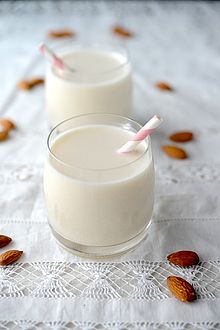 With a vegan in the household these days, my own dairy consumption has dropped. Nut milks are in the fridge, and I find unsweetened almond a nice alternative. The young miss seems to prefer soy, but that is tastebud-intolerant for me. We two agree flax milk is nice.

A few of my fb friends from Iowa State occasionally wax upset about the shifting patterns against animal exploitation. The ones who are dairy farmers–I get the bother. I also know from the vegan literature left in the bathroom that if Big Ag were held to the same standard as Michael Vick, a lot of agricultural workers and executives on factory farms would have exited the NFL for prison time.

Granted, the consumption of cheese, yogurt, or milk chocolate isn’t directly harmful to animals–or needn’t be. But I do find it interesting that dairy farming has transformed much of the human race into genetically modified organisms.

Todd lives in Minnesota, serving a Catholic parish as a lay minister.
View all posts by catholicsensibility →
This entry was posted in Food, Science and tagged dairy, evolution. Bookmark the permalink.

2 Responses to The GMO’s Among Us