Posted on 4 February 2019 by catholicsensibility

Care for people who are sick and dying has been part of Christianity from the time of Jesus. The Jewish tradition extends centuries into the past from there. The book of Job is one of the most well-known Scriptures both to those within the faith and people outside of it.

Westerners zero in on the “patience” aspect. However, that narrative doesn’t go deep enough. By the beginning of chapter 3, like many sick people, the patriarch has had enough:

After this,
Job opened his mouth and cursed his day.
Job spoke out and said:
Perish the day on which I was born,
the night when they said, “The child is a boy!”

I’ve known people beset by chronic illness. Constant pain is one of the worst. Likewise cancer sufferers who find the treatment as brutal as the disease. Or more so. “Perish the day I was born”–it’s not an uncommon thought. I wouldn’t shy away from it either. 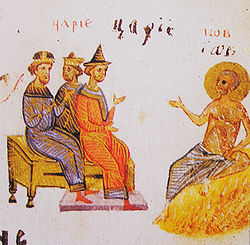 A person with a lasting illness may be anointed if the condition worsens. The Pastoral Care rites provide for repeating anointing, even for the same sickness. I would think that a spiral into discouragement would certainly count also, particularly if the original condition was grave enough to steer a person to wish she or he had never been born.

An inexperienced minister might be tempted to discount Job’s feeling expressed in this reading. If a person truly feels this, a more fruitful tack might be to just listen. And not imitate Eliphaz or Bildad or Zophar.

For an in-depth treatment of the Pastoral Care rites, check this page that outlines our examination from a decade ago.

Todd lives in Minnesota, serving a Catholic parish as a lay minister.
View all posts by catholicsensibility →
This entry was posted in Pastoral Care of the Sick, Scripture. Bookmark the permalink.