Posted on 7 May 2019 by catholicsensibility 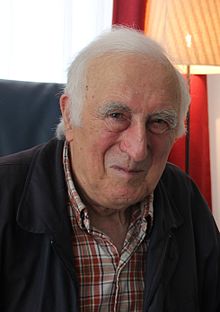 I’ve just noticed the news that Jean Vanier has died. One religion media tribute is here.

There’s a question hanging in the air for those who were influenced by him. Our once-collaborator Neil cited another source in suggesting that if the L’Arche founder were not a saint, nobody was.

In the final years of his life, as a faithful Catholic theologian leading an international ministry, Vanier was repeatedly asked the question of what he would think of being made a saint. He always dismissed the idea. He explains that he really just wanted to be a friend of Jesus, someone who exemplifies a beautiful life of love and humility and not the pursuit of accolades and worldly success. He also said that anyone who would call for him to be a saint must not know him very well.

Are any authentic saints totally self-aware of their own cooperation with God’s grace? I think anyone can aspire to sainthood. It’s when it gets to the stage of lobbying that perhaps we have fallen short. That said …

“As soon as you say people are saintly, you’re putting them on a pedestal and saying you can’t do it,” he said in one interview. “But we are all called to work together and love each other and we don’t have to be saints to do that.”

Perhaps we are not saints when we begin, but the transformation of just being a friend of Jesus and his poor ones is enough. But the man is right: the Christian aspiration is to work together and love one another. Sainthood is something different than religious celebrity. Saints inspire imitation. Celebs admiration. Saints invite intimacy. Celebrity uses pedestals. When we walk close to saints, we are drawn into their lives, their values, and their love.

I first became aware of him in the late 80s through Henri Nouwen. In his days as a contributor here, Neil wrote a few pieces about him. Paging through these, this one on wilderness seemed timely for the world situation these days. More than back in 2006, certainly, as a sense of alienation in the West has gotten more intense as endless wars continue and chaos settles into governments here and abroad.

We have to remind ourselves constantly that we are not saviours. We are simply a tiny sign, among thousands of others, that love is possible, that the world is not condemned to a struggle between oppressors and oppressed, that class and racial warfare is not inevitable.

Todd lives in the Pacific Northwest, serving a Catholic parish as a lay minister.
View all posts by catholicsensibility →
This entry was posted in Saints and tagged Jean Vanier. Bookmark the permalink.