Posted on 10 June 2019 by catholicsensibility 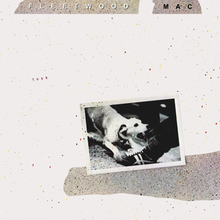 nother college moment, which was really more than one moment: Fleetwood Mac’s Tusk.

I saw the band live twice, once before the album was released and once shortly after. The former show was my first all-day stadium rock event. They were the last of four bands, and well worth the wait. I enjoyed a pre-Tusk version of “Sisters of the Moon.”

I think one’s reaction to music is influenced by happenings in life. I was a senior in college, and feeling as adrift in my life as I’d ever been. My friends were becoming more solid: growing up, getting into serious relationships, looking at graduating and getting jobs. After three-plus years of university, I was even more unclear than I was as a seventeen-year-old freshman.

I listened to the radio broadcast of the album, and then bought it anyway. It accompanied a most difficult semester: a relationship ending, failing a course, living off campus in a hotel, and a widening divide between me and my world: family, friends, and academics. So many of the songs had an appeal. When I’ve plugged the cd into the car stereo, about every year or so, I find myself transported to the Fall of 1979, and all the memories. Some of which are not so bad as they seemed earlier in my life.