Posted on 12 June 2019 by catholicsensibility 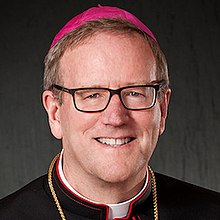 Bishop Barron seems to be getting some pushback for his talk at USCCB this week (like here), from his advocacy for Jordan Peterson (whom I had to look up–ick!), to his comment about “dumbing down the faith.”

I will confess to being a fan of the man. I’ve mentioned him on this blog now and then. I think he’s a five-star writer and a four-star filmmaker. If evangelization is the first priority of the Church, I didn’t think he was there four years ago, and I still agree on that point. Bishop Barron’s reach is to those who are already Catholic. I don’t think that’s traditional apologetics. his appeal is to those well-established on the Barque.

Maybe I give Bishop Barron one-and-a-half stars on evangelization (making believers from newcomers) because his real gift is inspiring believers to make the leap from country club members to engaged Christians. There;’s nothing wrong with that gift.

When Barron turned his attention to signs of hope, the first item was that most young nones are not hostile to religion, they are merely indifferent. Why is that hopeful? For someone who claims to have spent a lot of time around young people, I think Barron misses the mark here. I find indifference far more difficult to overcome than hostility.

I think this is true. Hostile people are engaged one way or the other. They might watch a Word on Fire film prepared to argue and fuss. They might delve into a contrary website and take some pokes. Indifferent people don’t even turn on the computer.

You can talk with someone who violently disagrees with you, but with someone who just doesn’t care, they tend not to listen. In both cases, nothing Barron said yesterday had half as much insight and evangelical wisdom as Pope Paul VI did when he said in Evangelii Nuntiandi #41: “Modern man listens more willingly to witnesses than to teachers, and if he does listen to teachers, it is because they are witnesses.”

That paragraph got a brief commentary here. My conclusion on EN 41:

The importance of the witness of personal sanctity is something perhaps lost on many modern bishops. It is their way out of the collective shame and scandal in which they are buried. It is the only way people will listen.

As for Bishop Barron, I think he has undeniable ability to be able to tell the story of Christian faith. He tells it with words, pictures, and video. I feel a certain affinity to that. As a church musician, my main workspace is with those who are already believers, and my tools are music and liturgy. By the time a seeker gets to Mass, their curiosity is already engaged. If worship nudges them closer to Christ it is likely because they have already heard the Lord’s call.

I think Bishop Barron works in a similar place. Certainly as a presider at Mass and the sacraments. People who watch his films and read his books are already on the fish hook. People praise him for being an effective apologist. I think that’s correct if we’re talking the “new apologetics” to Catholics themselves. The distinction on “new” is that it’s no longer for non-Catholics. Apologists today think up arguments in their heads and then asnwer them. Regular readers here know I have little patience for that.

One thing we do need is to shore up the spirits of those who already believe. That’s not a bad thing. Just let’s not call it evangelization. And don’t ask for help from internet celebs. I think Catherine of Siena and Francis de Sales are far better guides.

Todd lives in Minnesota, serving a Catholic parish as a lay minister.
View all posts by catholicsensibility →
This entry was posted in bishops, Commentary, Evangelii Nuntiandi, evangelization and tagged Bishop Barron. Bookmark the permalink.

5 Responses to On Bishop Barron