Civics Lessons For All

Posted on 30 July 2019 by catholicsensibility 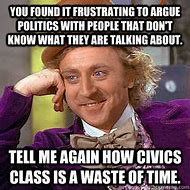 I don’t usually go in for those internet memes on the matter of “civics.” But these days I’m tempted.

Through social media, I am aware of some dust-up between a member of Congress and the US president. I haven’t bothered to view specifics, because one, I generally don’t view social media as a news source, and two, the whole thing sounds more like heat than light. Or insight.

One of my college-educated friends, who happens to be a supporter of the president, suggested:

… we should hire good folks like the fine representative from Baltimore to run things for us.

Rather misses the point that national legislative representatives don’t “run things” unless it’s an election campaign. And usually someone gets hired to do that.

The federal executive branch has other duties and responsibilities, which generally do not include conflating the roles of various branches of government, be they national, state, or some form of local.

I do know that violent crime trends to poverty-stricken areas, both urban and rural. Maybe the 1% have their own problems with abuse, fraud, racketeering, and the more quiet stuff like arsenic and old lace. All I know is I’ve seen a lot of people connected with Mr Trump’s White House run go under the investigators’ eyes. Most of those folks look male, white, and rich to me. There may not be as many individuals as those who perpetrate poor-on-poor crime, but they can do a lot more damage to society–money, bank failures, drug pushing, among other things.

As for the president, it’s not at all surprising he comes up empty on civics. He’s used to running businesses. Businesses aren’t democracies. (Though perhaps they could be.) I think he’s finding frustration with the realization that the federal government isn’t a business. No matter how otherwise corrupt, self-absorbed, or incompetent it may be.

Meanwhile, maybe this illustrative video will assist those who struggle to find meaning in government today.