Posted on 22 October 2019 by catholicsensibility 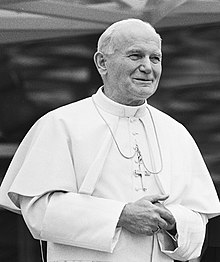 A social media friend posted on today’s saint. I noticed that Polish bishops have asked for him to be named a Doctor of the Church and a patron of Europe. One colleague in ministry met him and interacted with him and his entourage before a large Mass here in North America. He radiated holiness, my friend (hardly a conservative) related.

A number of Catholics might say, not so fast. Dissenters appeared on my friend’s thread, and the main objection was the failure to diagnose and stop the twin threats of clergy abuse and episcopal cover-up.

My personal view is that his advisors and maybe he got caught up in the conservative = good/liberal = bad dichotomy. Perhaps that enabled many predators to wrap themselves in the mantle of tradition and parrot the good words people wanted to hear to cover up wrongdoing.

As an administrator, John Paul II might have done better to widen his circle of advisors, and let in fresh ideas. Bottom line: people aren’t declared saints for being competent personnel managers. The Church eroded badly on his watch, but maybe his WYD’s and other efforts of outreach helped save some.

My own suspicion is that he never believed that clergy and bishops could behave as criminally as they did. Pope Benedict XVI was eventually disabused of that notion, and it pretty much chased him off the chair of Peter.

It seemed the title “the great” was quickly applied some years ago. Along with sainthood, “doctor” would make for the triple crown. Fanboys and fangirls might like that honor for him, which transfers to a sense of self-worth for them. I think waiting for a generation or two might be prudent. Not for some long-hidden scandal to break. (I don’t think there is any.) But to wait to see how his non-administrative work settles in the bigger picture over the next century or so.

Todd lives in Minnesota, serving a Catholic parish as a lay minister.
View all posts by catholicsensibility →
This entry was posted in Saints. Bookmark the permalink.