Posted on 11 November 2019 by catholicsensibility 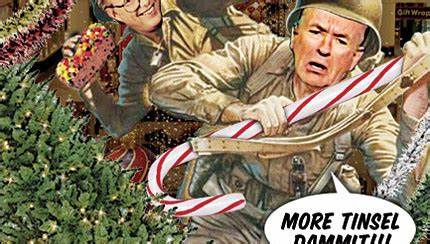 A fb friend poked some at former Wisconsin guv Scott Walker on his attempt to resuscitate the War on Christmas.

Commercial radio has begun to broadcast seasonal fare in my area. I heard bits to most of five songs in the car today. It was the usual suspects: Mariah, the Boss, José. Three songs mentioned Christmas explicitly. A fourth had Santa coming to town. The fifth was an instrumental of “God Rest Ye Merry.”

Seriously, I still don’t get the culturewar on this one. Christmas is alive and well. Jesus may be receding. One year in the last decade I counted about one in three songs dealing with the “reason” for the “season.” Last time I checked a few years ago, it was down to 10 percent.

Maybe prospective combatants could take a lesson from history and kick around a ball on a field. It is illustrative that according to the linked article, the 1% insisted on all-out warfare on future Christmas Eves and Days to ensure no future holiday nonsense had room to squeeze in amongst the much-deserved and sensible festivities.

Todd lives in Minnesota, serving a Catholic parish as a lay minister.
View all posts by catholicsensibility →
This entry was posted in Christmas, Commentary and tagged war on Christmas. Bookmark the permalink.

1 Response to War? What War?