Posted on 25 November 2019 by catholicsensibility 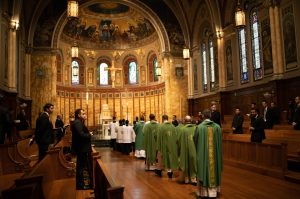 I don’t know why I clicked this link nor why I carried on to read about two-thirds of the report on the investigation of St John’s Seminary in Massachusetts. On the whole it convinces me that seminaries are not the best way to form people for the ordained priesthood.

One thing that struck me was the rampant loneliness that stretched from rector to expelled seminarian and everybody in between. Certainly, a minister can draw from her or his loneliness and other wounds from time to time. But for a culture that attempts to emulate the cloistered monastic life, St John’s Seminary seems to fall far short. The descriptions of life seemed to have the worst of the college experiences: cheap beer, awkward attempts at romance (or a faked shadow of it), people-pleasing up and down the ladder. The thought of combining late adolescence with alcohol and loneliness strikes me as a recipe for disaster.

Seminary leadership was roundly criticized. When it was criticized from within the institution, offenders stayed put mostly, and whistleblowers were transferred. I found amusing the tale of the criticism of a faculty member who, in turn, brandished the silent treatment for one to six years, depending on to which person the interviewers spoke.

Another confirmation for me that candidates for ministry, ordained or lay, men or women, would probably do better in an open environment that involved these items:

No bishop is ever going to ask for my input on these items. Seminary culture, good and bad aspects both, are too ingrained in Roman Catholicism for any of us to expect significant change before several decades pass.

Todd lives in the Pacific Northwest, serving a Catholic parish as a lay minister.
View all posts by catholicsensibility →
This entry was posted in Church News and tagged st john seminary brighton MA. Bookmark the permalink.

1 Response to The Boston Seminary Report