Making It Up As We Go Along

Posted on 14 January 2020 by catholicsensibility 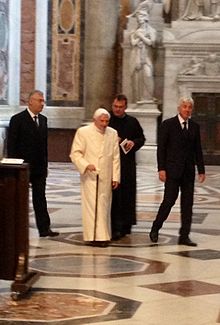 As of this morning, it seems our pope emeritus isn’t pleased his name was attached to that book on celibacy. Take it off, he instructs.

That will certainly put an interesting twist on various interpretations con and pro coming from Catholic circles yesterday.

The figure of ‘pope emeritus’ is not to be ‘rethought,’ but invented, because it has no precedent in history. Ratzinger is creating it with facts.

In other words, making it up as we go along.

(T)he prudence of a pope emeritus in intervening on a question on which the reigning pope is deliberating depends entirely on the quality and severity of the matter. (T)his severity is what obliges him (not only encourages him) to break his silence.

For a nonagenarian, it also raises the question of how hangers-on might manipulate a pope emeritus. We know that even parish pastors in their working prime are subject to the pleas of special interests. We have the negative witness of bishops who were groomed and persuaded to cover up serious sins that any basically moral person would have clamped down upon.

The denial of our pope emeritus seemed to come pretty quickly, with more pace than walkbacks on his occasional missteps in active Petrine ministry. Again, the man has been ill-served by those wishing to attach his coattails to their agenda.

Maybe the precedent for a retired pope is not so new. We could do a study on retired bishops. How many live in their former digs at the cathedral manse? How often do they intervene on issues facing the active bishop in the diocese? Do they return home, write books, live in retreat houses, or otherwise make themselves scarce? Maybe the precedent has been with us, in a few thousand examples.

That doesn’t necessarily help book sales, does it?

Todd lives in the Pacific Northwest, serving a Catholic parish as a lay minister.
View all posts by catholicsensibility →
This entry was posted in bishops, Church News and tagged pope emeritus. Bookmark the permalink.

1 Response to Making It Up As We Go Along