Posted on 20 April 2020 by catholicsensibility 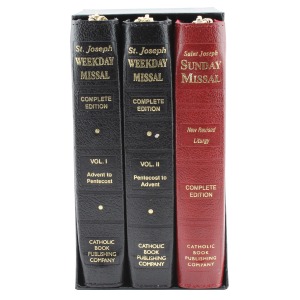 As long as I can remember (and my memory goes back almost a quarter-century in married life) my wife makes a habit of reading the Scriptures from Mass of the day. This page at the US Bishops’ site makes it easy to find. She used to thumb through her St Joseph Missal, but as a concession to larger electronic print, she’s used the laptop for some years now.

She would prefer daily Mass, but her chronic medical condition, plus the varied schedules in different parishes makes that a far-less-than-daily experience.

It’s a simple method, but when you’ve built up a few decades of discipline, it appears to be a very fruitful practice indeed. Through it, you are praying with the largest active group of Christians in the world: people who celebrate Mass on a daily basis. You’re in union with just about every Catholic priest on the planet. My wife doesn’t just zip through the readings. She prays intercessions after the Gospel reading. When she is seriously sick, and I’ve brought the Eucharist from Sunday Mass, we always do all the readings, Mass prayers, and intercessions.

Not everybody can get into the Liturgy of the Hours, or the various spiritual practices of Centering Prayer or Lectio Divina. But for someone familiar with Mass, you can’t go wrong with a link to the daily prayer of millions of Christians in monasteries, daily Mass chapels, mission outposts, schools, and the Catholic church down the road.

I’m reminded of a friend in parish ministry who experienced a year in which none of the people in RCIA inquiry decided to go ahead with Baptism or Confirmation. Her team, long-assembled over the years was crushed. Together, they determined that if nobody was “going through” the catechumenate that year, they had an opportunity. They would experience one together. They paired up as companions, like sponsor and candidate. They broke open the word after Mass each Sunday as a group, instead of the usual dismissal catechist rotating amongst the team. They prayed the various ritual texts at the mid-week meeting: the blessings, the anointing prayers, the scrutinies, and the reflections on the Lord’s Prayer and Creed. They all attended the Easter Vigil and continued meeting through the mystogogia period. After my friend described her experience, I thought, as she did, what a blessing that was. I’ve only been responsible for RCIA in two parishes for four years. It never seemed I had enough time to form my teams and myself–it was busy year-round.

In this time of pandemic, I think one opportunity is to form ourselves in the daily Word. If we are so moved, and start now, we might find when we get the all-clear signal, we are moved to go still deeper. If not Mass every day, then an extra one during the week. And we still retain that anchor of union with people who have made that commitment to be a daily Christian.

Todd lives in Minnesota, serving a Catholic parish as a lay minister.
View all posts by catholicsensibility →
This entry was posted in Scripture, spirituality. Bookmark the permalink.