Posted on 25 April 2020 by catholicsensibility

At PrayTell, I read about a news item of interest to liturgy folks, especially if they fall under the traditionalist umbrella. Apparently, the CDF (not the CDWDS) is polling the world’s bishops to assess the 2007 loosening of the celebration of the unreformed Roman Rite. 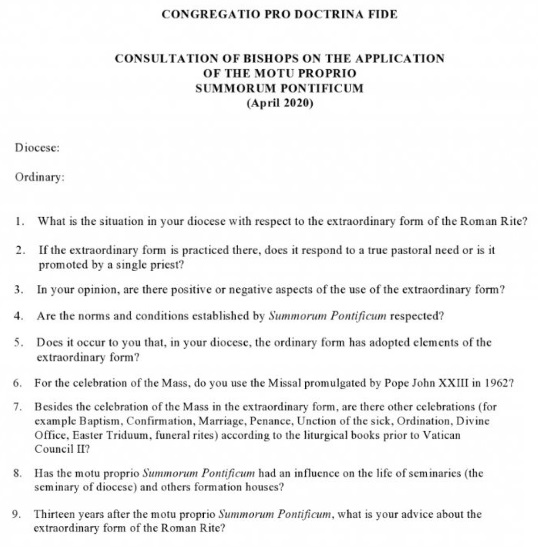 I can’t imagine this initiative will sit well in some quarters. The sense of freedom to be able to worship is a sensitive spot these days for wealthy Catholics who like to spread their influence. Stay-at-home, which appears will affect liturgy of all kinds on a scale of months (not just weeks) stirs up strong feelings. You readers know I think the complaints, however honestly felt, are a cause for missing important opportunities. But that’s fodder for other posts.

I think a significant non-controversial policy needs review. Pope Benedict anticipated objections to the 2007 document, so much so that his introduction and explanation was longer than the actual legislation itself. Avoiding assessment on a controversial initiative is more a sign of dysfunction than actual satisfaction.

We are about seven years into Pope Francis’ Petrine ministry. If his agenda included squashing liturgical traditionalists, Cardinal Sarah would have been fired already, and this survey would have surfaced 83 months ago. Not to mention the felt banners that would be adorning the Sistine Chapel.

Gosh, all this distress could have been avoided if only the bishops at Vatican II had made it clear that they themselves wanted a reform of the order (singular) of Mass, and that they were not leaving Pope Paul and his successors free to keep the 1962 Missal in use if they wished. The council fathers could have said specifically that they wanted the rites simplified, duplicated elements removed, and abandoned but edifying practices brought back.

Too bad they didn’t make it clear, eh?

Todd lives in Minnesota, serving a Catholic parish as a lay minister.
View all posts by catholicsensibility →
This entry was posted in bishops, Church News, Liturgy and tagged Summorum Pontificum 2007. Bookmark the permalink.