Posted on 5 May 2020 by catholicsensibility

A brief announcement on PrayTell elicited an unfortunate snicker from the back of the class. Some traditionalists are not really up on their Latin, it seems: De mortuis nihil nisi bonum.

I arrived relatively late to Catholicism. By 1969, the parish I landed in had a folk group in the middle of Sunday morning, and organ music bracketed twice on each side and Saturday night. There seemed to be no warfare between the genres. In fact, there was a vinyl collaboration for the music-loving pastor’s twenty-fifth anniversary. The music of Lucien Deiss was more memorable to me when I became a Catholic. “All The Earth” sticks in my head as does another organ song of the day, “At That First Eucharist,” which the non-folk group Masses programmed frequently.

My godparents assumed I would be most interested in that 9:45 Mass, but my musical preferences then were classical. And I liked the sound of the pipe organ. I thought the non-Ray Repp song, “Shout from the highest mountain the … (pause, wait for it!) glory of the Lord” was awkward.

My first Catholic Scout retreat had the theme “To Be Alive.” They played that Ray Repp song (and others) with well-amplified electric guitars at the seminary where we were hosted. There was a pause in that song, too.

Later on I met Ray Repp in person. He was promoting his own venture, K&R, at an NPM convention. He was humble and self-effacing. I have a vague recollection that he shared that much of his early music was intended to be catechetical, and not liturgical. But other people sang it at Mass, and he himself was surprised at the reception it received and the enthusiasm it generated.

Of his songs, the most memorable for me is “Hear, O Lord.” I might have caught it growing up. It was also programmed at the Newman Community when I was in college. Mr Repp’s music was fading by then. Others were also setting the Bible and Lectionary to music, and they were doing it with more than the older composer’s “four chords.” (Seriously, Ray Repp knew a lot more than four chords.)

Publishers of the late 70s and 80s were much more astute in business than FEL. But Ray Repp was a groundbreaker in many ways. Setting the vernacular Psalms and other Scriptures to music was certainly something other people were doing. Ted Marier. Alexander Peloquin. Ralph Verdi. Howard Hughes. But their music did not catch the Catholic imagination on as large a scale as Ray Repp, Joe Wise, Peter Scholtes, and many others. That should tell us something about the elusive nature of ministry and the inspiration of God. A traditionalist might lament that fact. But what can they do about it? If FEL’s business sense was poor, organists (if they were even thinking along those lines) had it worse.

One huge advantage guitars have over pipe organs: portability. If you want to sing music in a carpeted living room or Newman Center lounge, you really need instruments. Maybe an out-of-tune piano can help. But lots of people had guitars fifty years ago. Small groups are powerful furnaces for sharing faith and being touched by the Holy Spirit. This is a very, very good thing indeed. Don’t deny it. Don’t underestimate it.

For a Christian to more or less actively wish that their chant hero had the accolades instead of a singer-songwriter and their guitar is likely sinful. It’s called envy. It comes not from a sense of jealousy, where one aspires to share a certain positive benefit of someone disliked. In the church setting, it comes from actively desiring a person lose what God has bestowed through cooperation with supernatural grace. Does “sin against the Holy Spirit” have any meaning here? 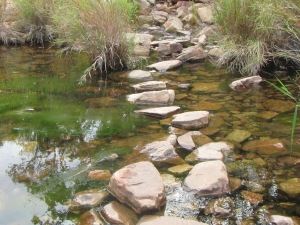 Rolling back to the recently deceased, I cannot say Ray Repp had much of an influence on me. I missed the late sixties, and I was probably too young to have been involved in my parish’s musical development. But I recognize from afar the movement God effected through the man and his songs. He was a stepping stone on a way through a river. Not the final shore.

If we aspire to replace the stone, or cross the river at a different ford, perhaps a better tack would be to ask the Lord directly, “How do you want me to serve you? Where do you want me to go?” And in the words of another much-disliked song by another disliked composer we affirm our place in the Lord’s service, “Here I am, Lord.” We acknowledge, “I have heard you calling … .”

Ultimately, our service as church musicians is less dependent on any human invention of genre or human ability as artists. When we walk in the doors of a church, our hands become God’s hands. Or they are no hands whatsoever.

I don’t play his music, but I think I can safely express some regard to Ray Repp: “Thanks for the hands, and thanks for being a stepping stone that I and others have relied upon. Go in peace.”

Todd lives in the Pacific Northwest, serving a Catholic parish as a lay minister.
View all posts by catholicsensibility →
This entry was posted in Commentary, Liturgical Music and tagged Ray Repp. Bookmark the permalink.