On My Tube: Amazon SF

Posted on 12 May 2020 by catholicsensibility

Generally I don’t offer book or tv reviews unless there’s some element of faith involved. Or astronomy. In these days of pandemic, our streaming options have expanded somewhat. While I originally got sucked in to Amazon for High Castle, I’ve tuned in to their movie offerings and occasional tv series that looks interesting. It is an expanded era for 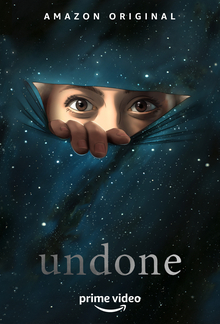 speculative fiction. It’s also an expanded era for low quality offerings. More on that in another post, maybe.

An exception to low quality was Amazon’s first entry into animated science fiction, Undone. Good science fiction takes a single idea, or maybe two in a pinch, and explores that reality fully. The depth occurs when ordinary human beings confront a reality different from ours. Our engagement is how we would deal with it.  Undone is a better series than High Castle so far because there was creative commitment to the single idea of the shifts of time as perceived by the main character. That, and the fact that the High Castle braintrust got bored with their toy and ended it with a high degree of clumsy.

I think Upload, Amazon’s newest foray into speculative tv rests somewhere between these two. I’ve only seen two episodes so far, so maybe I’ll let you know how it turns out later.

The premise isn’t unique: downloading a human consciousness into a place outside the body. Presumably, a person can exist forever in such a way. So in the future people who are close to death have, if they have the money, the option of continuing to live in a simulated reality.

I will give the Upload creators one kudo for presenting an older man who is firm in his choice to die naturally so he can join his wife in heaven. It doesn’t really explore his faith beyond his desire for unity with his wife. His daughter works for the company that provides the soon-to-be-dead their upload into a virtual existence. It’s presumed she’s planning to take this route herself when the time comes. Dad seems less stuck in the middle than resigned to a “natural” fate. That’s a great tension for fiction: two people wrestling with a speculative point and coming to different conclusions for themselves.

Oh, and there seems to be some conspiracy afoot that makes it worthwhile to kill people. That is also not a new idea, but it does add a good twist to a show mostly a comedy on relationships and awkward situations.

What do you think? If you could live forever, or at least longer, in a computer simulation, would you? What if your choice was influenced by the people you would or wouldn’t join?

Todd lives in Minnesota, serving a Catholic parish as a lay minister.
View all posts by catholicsensibility →
This entry was posted in science fiction, spirituality, television. Bookmark the permalink.

2 Responses to On My Tube: Amazon SF