Night Will Be No More: Tú Vales (You Count)

Posted on 3 June 2020 by catholicsensibility

While El Paso bishop Mark Seitz’s pastoral letter addresses primarily the situation of Latinos in the contemporary world, he is not ignorant of the Black lives that matter. A reminder of the racism at the root of our second-largest state in paragraph 25:

Prior to 1835, the area known as Texas was part of Mexico. American immigrants settled in the Mexican territory and brought with them Black slaves. By 1825 one out of five American immigrants living in Texas was an enslaved African.(See Randolph Campbell, An Empire for Slavery: The Peculiar Institution in Texas,1821-1865 (Baton Rouge: LSU Press, 1991)) Historians acknowledge that the most significant factor in determining the economic development and ideological orientation of Texas at the time was slavery.(Ibid.) The 1835 Texas Revolt and the establishment of the Republic of Texas in 1836, were driven, among other factors, by the will to protect the institution of Black slavery after its abolishment by Mexico in 1829.

The history lesson in paragraphs 21 through 45 is a short read, and worthwhile. Especially for people seriously interested in why things happen today.

Why might you think Our Lady of Guadalupe has such traction among Western Hemisphere Catholics? What do you make of this assessment?

49. The dehumanization of Indigenous and Blacks, and the displacement of the American Indian meant that these communities were deprived of the narratives, land and religious traditions that gave their life consistency and meaning. New racialized narratives for self-understanding were forced upon them and they were forced to see themselves through the eyes of their masters. In order words, tú no vales. But no one has the right to impose that type of identity.

50. Against that dehumanization, as once she said to San Juan Diego, who represented a people dehumanized and disenfranchised, Guadalupe says to our people today, ‘you count’, tú vales.

I find resonance in today’s protests against racism. People who don’t count as human beings can be killed and the perpetrators are not murderers. Legally.

One possible way out is to embrace the outreach and example of Mary as she has been experienced by Americans from Juan Diego down to people of the present day. 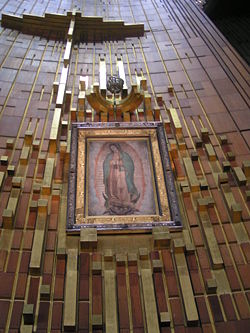 There is great wisdom in looking to people who identify with those in need.

Pope Francis had some words today for the people of the US, and invoking the Virgin’s intercession:

Dear brothers and sisters in the United States, I have witnessed with great concern the disturbing social unrest in your nation in these past days, following the tragic death of Mr George Floyd.

My friends, we cannot tolerate or turn a blind eye to racism and exclusion in any form and yet claim to defend the sacredness of every human life. At the same time, we have to recognize that “the violence of recent nights is self-destructive and self-defeating. Nothing is gained by violence and so much is lost”.

Today I join the Church in Saint Paul and Minneapolis, and in the entire United States, in praying for the repose of the soul of George Floyd and of all those others who have lost their lives as a result of the sin of racism. Let us pray for the consolation of their grieving families and friends and let us implore the national reconciliation and peace for which we yearn. May Our Lady of Guadalupe, Mother of America, intercede for all those who work for peace and justice in your land and throughout the world.

May God bless all of you and your families.

Todd lives in Minnesota, serving a Catholic parish as a lay minister.
View all posts by catholicsensibility →
This entry was posted in Night Will Be No More and tagged Our Lady of Guadalupe, racism. Bookmark the permalink.