Posted on 23 July 2020 by catholicsensibility 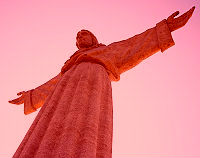 More in the section on Conversion and Baptism:

From the outset, conversion is expressed in faith which is total and radical, and which neither limits nor hinders God’s gift. At the same time, it gives rise to a dynamic and lifelong process which demands a continual turning away from “life according to the flesh” to “life according to the Spirit” (cf. Rom 8:3-13). Conversion means accepting, by a personal decision, the saving sovereignty of Christ and becoming his disciple.

This reminder sums it up nicely. Baptism is not a membership card into a club. It is the beginning of a lifelong commitment. This is where some people interpret a “new evangelization, the effort to focus on baptized Catholics who have yet to make a personal decision to accept Jesus and move from being a member, a believer, toward being a disciple.

The Church calls all people to this conversion, following the example of John the Baptist, who prepared the way for Christ by “preaching a baptism of repentance for the forgiveness of sins” (Mk 1:4), as well as the example of Christ himself, who “after John was arrested,…came into Galilee preaching the Gospel of God and saying: ‘The time is fulfilled, and the kingdom of God is at hand; repent and believe in the Gospel'” (Mk 1:14-15).

On this paragraph, we might say, “hold on.” The Church certainly should be expressing this call, but it doesn’t always do it. Sometimes our pastors with members. Sometimes it’s the numbers, sometimes the cash flow. These are the usual counters of success: large parishes, often with schools, with a healthy budget.

Opportunities for continuing conversion exist, but they are often facilitated in smaller numbers, sometimes accidentally, sometimes by groups and associations, and sometimes in ministries where we accompany newcomers–RCIA, high school and college campuses, to name a few. Sometimes when people reach a crisis: an acknowledgement of addiction, death of a loved one, loss of a job and the forced new opportunities that result.

My sense of these passages in this document is that Pope John Paul II wanted to believe the Church was more active and engaged than what it was. But as a priest, he was probably a bright exception to the norm. His Church, then and now, struggles to connect the dots for people and lead them forward into discipleship.