Posted on 21 August 2020 by catholicsensibility

I think it would take a whole college semester to analyze the post-Vatican II traditional movement in liturgy. We think the dogmatic councils of other eras settled things once and for all. But they really didn’t. After every council there was a movement to recover what was sensed as lost. Some were heresies, but most were probably not. Some might have been people misled by charismatic leaders, but some were honest aspirations.

I watched St Blog’s gorilla Mark Shea wander into the liturgy wars on facebook yesterday. I’m sure he knew a firestorm would result. A world-engulfing meltdown was a surprise to him? Not to me.

Predictably, the flames that sprouted served to reinforce Mark’s opinion. But two other themes emerged. One, that some of his readers were genuinely hurt by his post. And two, that some traditionalists criticized the words and tone of the more vehement responders.

If it were a decade or more ago, and if I were willing to wade into the liturgy aspect of this discussion, I think I’d disagree. I think clericalism is still the bigger problem.

I do think that there are qualities inherent in any of the Church’s liturgies that appeal to what attracts traditionalists. The 1962 Rite contains some of them, but most are probably not an exclusive part of that form. Some offensive parts are more due to local variation: the taste of the priest or musicians, for example.

I would suggest that there’s not any pre-conciliar liturgical music that is unfit for the modern Roman Rite. Some of my objections would lie more with devotional hymnody. The rest would be performance music designed to take away the voice of the assembly. Liturgical, devotional, performance–it’s all sacred music by any definition. But not all sacred music is suitable for liturgy. Even traditionalists acknowledge this fact, though their objections usually center on genre rather than text or performers. A bit of creativity and diplomacy is needed to hurdle these obstacles, and perhaps that task was a little too much for some folks. The exceptions being people like Ted Marier, Alex Peloquin, Larry Heiman, and others whose names will go unrecognized by both reform2 and Vatican II advocates. 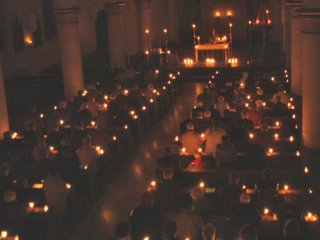 The Latin Mass, 1962 or even 1970, was seen as a badge of protest against Vatican II in the seventies–that is admittedly my subjective experience. To what I could see, organs and choirs were still ascendant well into the 80s. At that time, conciliar resistance was less about music, and more about ritual and language. Today it seems to embrace the whole of the culture, including music. Traditional musicians have even borrowed the post-conciliar meme of singing the Mass, rather than singing at the Mass. There are some overlaps to this, and some parallel aspects. Many of my colleagues in the traditional culture are mystified by my take on history. It would seem some have made Vatican II less of a study than I’ve made pre-conciliar liturgy.

Otherwise, the sorting out of embittered Catholics of any stripe isn’t going to get suffocated anytime soon. Some people have legitimate grievances from clericalism or first-hand suffering because of scandal. It takes time to heal.

And social media sorting people into narrow cadres of the like-minded? That’s a bigger problem than the Catholic Church.

Todd lives in Minnesota, serving a Catholic parish as a lay minister.
View all posts by catholicsensibility →
This entry was posted in Liturgy, The Blogosphere. Bookmark the permalink.