Posted on 27 September 2020 by catholicsensibility 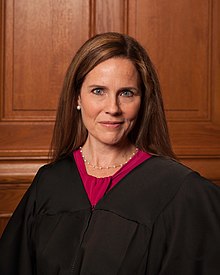 I see much hand-wringing on the political situation surrounding the latest nomination to the SCOTUS. It’s lamentable that so much ideology is invested in a judiciary, one way or the other. Like some people, I don’t think this is really about abortion. It’s probably a lot more about the ideological agenda of tamping down the rights of citizens, and preserving the big moneymakers’ investment portfolios.

Maybe there’s some good that will come out of this.

For one, maybe the flawed ACA will get tossed so a Dem Congress can just implement single-payer health insurance like civilized countries enjoy. It’s not an absolutely perfect situation right now. My take is we have a GOP plan for healthcare that unlike fifty or even thirty years ago, Republicans don’t even like anymore.

For another, we have a committed person of faith on the Court. I’m not interested that much in the notion of original intent of the Founders. In 1776-89, we had a mix of agrarian frontier culture with slavery, misogyny, exploitation, sexual abandon, and such. Maybe we still have some of that today. But a lot more people crammed together in some places, and the needs have changed. Maybe federal legislators will have to do things differently, and write tighter laws.

Fussing about the process is fruitless. Presidents and Senates name judges. The Republicans have both. They get to pick. In 2016, one group did it’s job and the other didn’t. That was wrong. Two wrongs don’t make a right. If Judge Barrett has a spotless CV on the judicial front and no significant skeletons, then she’s a shoo-in. If that’s a bother, too bad. Get better candidates for the presidency and the US Senate.

People are getting used to protesting these days. I don’t see that changing soon. It probably needs to continue. Likely, it will.