What Star Is This?

Posted on 2 January 2021 by catholicsensibility 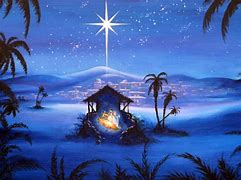 Here’s an excellent reflection on astronomy and what the Star of Bethlehem could have been. Convincing was the notion that it wasn’t really a celestial object as notable as The First Noel describes:

They looked up and saw a star
Shining in the east beyond them far,
And to the earth it gave great light,
And so it continued both day and night.

This describes a supernova. And such a sight would have been noticed by Herod and his advisors, so there would be no need to query the Magi about its appearance as we read in Matthew 2:7.

Christopher Graney from the Vatican Observatory blog bringing in some thoughts about this winter’s Jupiter-Saturn encounter:

(T)he “Star of Bethlehem” could never have been the blazing beacon portrayed in Christmas cards and hung above Nativity scenes everywhere. …

What is the basis of this pontification?  The second chapter of Matthew begins with magi showing up in Jerusalem, looking for a newborn king of the Jews because they had seen his star.  Matthew begins the star story with the magi; no one in Jerusalem had a clue about the star until the “astro-nerds” (magi) showed up and pointed it out to them.

This sounds just like the Great Conjunction of 2020.  Who would have noticed it just by chance?  After all, Jupiter had been in the evening sky since summer.  Indeed, back then it had been both brighter and better placed for easy viewing.  In the Conjunction, Saturn was far dimmer than Jupiter, and so its closeness to Jupiter did not make for any blazing beacon of light.  People who might have been outside just because they were returning from work or taking an evening walk or carrying out the household trash would have been unlikely to look up at the sky and say “wow, look at that!”  Even had they seen the Conjunction, they probably would not have thought much of the little star next to the bright star they had already been seeing for months.

Todd lives in Minnesota, serving a Catholic parish as a lay minister.
View all posts by catholicsensibility →
This entry was posted in Astronomy, Christmas, Scripture. Bookmark the permalink.