Posted on 27 January 2021 by catholicsensibility 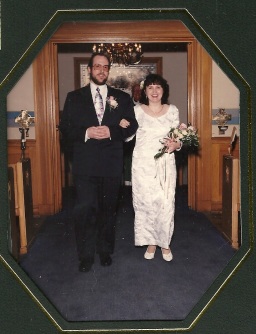 Breaking from my tendency to eschew public revelation about my family, I will say that a twenty-fifth wedding anniversary gives me cause for reflection.

It was on my parents’ that my two younger siblings and I were baptized in 1970. It was a surprise that they were willing to share their special day with our sacramental initiation. I have very few memories of my parents’ anniversary during my childhood years. They were mostly homebodies with different hobbies. After we were baptized, Mom was more church-involved despite never making the switch to Catholicism. Dad continued his love of sports, especially golf. Parent dates were fairly scarce.

My wife still laments she made her wedding dress, above, left. I was quite proud of my creative spouse-to-be. I do remember twenty-five years ago last night the mutterings and light cursing from the ironing board as last-minute alterations were being performed while the maid of honor and I were watching hockey on ESPN. She mentioned yesterday she wished she had just invested $60 in a white dress she saw at JCP and saved herself the time and effort. (For what? To join in watching sports on tv?)

For today, we went to Mass this morning and the pastor uncovered a blessing after Communion for us. But it struck me that we’ve been married as long as my parents were on that day long ago. Another couple at Mass testified to 52 years. A widow mentioned 51 before her husband passed away. It still seems like I have mastered so little of this sacrament. Especially when I think of all the couples I’ve known who have decades on us. Perhaps we will make it to the golden year.

The Church singles out 25 and 50 as extraordinary years for marriages, but I wonder if a smaller number isn’t overlooked for special prayer. It seems that many couples struggle in their marriages. It might make little difference on a larger scale, but who knows? Maybe the fifth or tenth could be singled out for some extraordinary observance in some public way. It seems we’re often quoted that marriage needs a lot of support and promotion.

Todd lives in Minnesota, serving a Catholic parish as a lay minister.
View all posts by catholicsensibility →
This entry was posted in My Family, Rite of Marriage. Bookmark the permalink.