Posted on 12 February 2021 by catholicsensibility 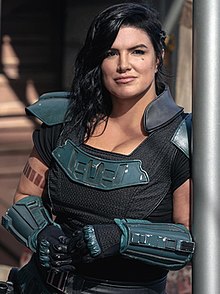 The actor who portrays a beloved character in the Star Wars “Universe” is pink-slipped by the corporation in charge. Outrage preceding and following, predictably, from different sides.

Regular readers here know I’m a skeptic on firing people. I think that tactic is often a cop-out. People need their jobs. And if they’re good at what they do, they’re more valuable than a run-of-the-mill boss. What is needed is more dialogue, listening to another’s viewpoint, making real friends: these things take time. They are worth it because people are worth it. When the perception is that they are not, usually it’s because people are valued less than things.

Combing through news stories on Ms Carano, it seems some people spent some time to take her aside and explain why her behavior was being criticized. So she changed some things, and doubled down on others. From what I see, the woman is tenacious and competitive. Total retreat is distasteful. Being told what to do, likewise. I see that.

One problem surfacing here is that there’s a distinction between promoting conservativism and promoting outright lies. That a person adopts conservative political positions and votes for candidates that reflect it: that’s one thing. Promoting the lie that fraud stained the 2020 federal election: this is neither conservative nor liberal. If you know better, you are telling a lie. If you trust the liars, you are some blend of naive, stupid, and gullible.

None of us on the outside have the inside scoop on the big picture. Maybe Ms Carano was a jerk with the other actors or with the boss. Maybe the bosses made a calculated decision the maximize corporate profit. Disney isn’t telling us, nor should they. It’s a personnel matter.

If we believe today’s news stories, Ms Carano has found alternate employment. Good for her. Hopefully, she finds colleagues in her new acting gig who will continue to take her aside and drop friendly advice about being a role model and focusing on telling the truth.

This is the way.