Posted on 2 March 2021 by catholicsensibility

I have no memory of what must have been my first childhood books. I do remember my mother subscribing to a book club, and I found the Dr Seuss tomes and other volumes a bit too childish for my six- or seven-year-old self. I passed them on to my sister.

I see the Seuss braintrust has pulled some volumes from publication.

Dr. Seuss Enterprises listened and took feedback from our audiences including teachers, academics and specialists in the field as part of our review process. We then worked with a panel of experts, including educators, to review our catalog of titles

Doubtless, this will cause consternation for some, a calling out of the so-called cancel culture. It might seem a surprise, given the more serious volumes in the Seuss oeuvre promote modern values like inclusion, fairness, and environmental awareness. Nobody’s perfect, and it seems racism has crept in on some illustrations and story lines.

One book of which I do have a strong memory is the fifth in the Babar series, the one about his friend Zephir the monkey. 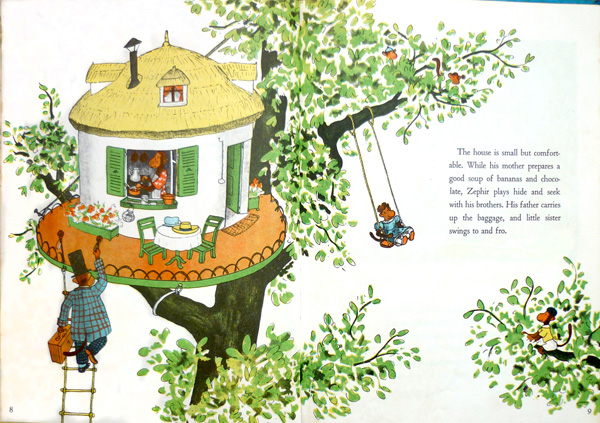 I had a stuffed monkey when I was a very young child, and I was fascinated more with those species than with the elephants of Jean de Brunhoff’s imagination. Many of the author’s illustrations pinned in my mind, including this one, above.

As an adult, I can appreciate that M. de Brunhoff’s talent draws the reader and viewer deeper into the story in just this two-page spread. One is invited to join in the hide-and-seek. Or experience a rather thrilling swing of a small person above such open space. That too-small domicile almost looks like a playhouse. And who wouldn’t be excited about a dinner of bananas and chocolate?

In a now-that-you-mention-it moment, I can certainly see the overall scope of the Babar series, especially the early books, illustrate notions hard to swallow today: monarchy, colonialism, the crude depiction of African humans, and a certain worship of European culture despite its rarely depicted flaws.

Looking back on this reading (and a few years later, I actually did read the Babar books left to me by my older brother) I recall the positive values depicted to replace fighting and violence: bravery in the face of poor odds, cleverness to achieve goals, an emphasis on family, friendship, and even reconciliation with making amends.

I suspect modern authors are able to combine all this with the same abilities as the 30s and 50s of the last century.

Todd lives in Minnesota, serving a Catholic parish as a lay minister.
View all posts by catholicsensibility →
This entry was posted in Commentary, On My Bookshelf, Politics. Bookmark the permalink.