Posted on 3 May 2021 by catholicsensibility 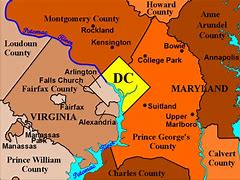 I noticed that GOP Senator Susan Collins spoke in favor of returning the District of Columbia to the state of Maryland. In this way, the people of the city of Washington get representation in Congress, but not two extra Senators.

This seems the most reasonable result of the statehood push. No US state has ever been close to the status of a city-state; this isn’t ancient Greece.

Some of my liberal friends might view this as a cop-out, but I think it’s a just solution. If it had been promoted a few months ago, Washington might have gotten it’s own Congressional district, bumping New York’s, I believe. If DC were to flip a red state to one less representative after the 2030 census, even the return of the District to Maryland might not happen. I suspect the window on Congress has closed for another ten years. At least.

One additional point: the city of Washington should be its own Congressional district as long as its population exceeds that of the least populous state. A gerrymandering solution isn’t really needed here.