On My Bookshelf: The Overstory

Posted on 22 May 2021 by catholicsensibility 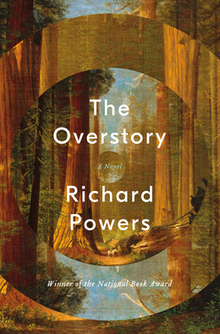 I can’t remember who recommended this Richard Powers’ novel, but I’m glad for the opportunity to read it.

Nine main characters are introduced in the first third of the book in brief biographies and a few family histories. Their connection with trees, either a single plant or on the scale of a forest are woven in. These narratives move quickly.

The middle third of the novel takes place in the 1980s. Five of the nine meet through the decade through love, friendship, and the shared cause of the ecological movement. They become involved in protests and their idealism and non-violence are battered by police brutality, political inertia, and personal discouragement. Violence ensues. The other four, non-protesters, have their own narratives that interact more tenuously with the others and from afar. Commitment to the cause intensifies, and because of frustration and crucial choices, life gets worse for all but one of the humans. The trees fare not so well either.

The final third of the book takes the reader into the 21st century and aging characters who find life taking a heavy toll: political defeat, broken relationships, illness and infirmity, prison, death, and the impending sense that a price will be exacted upon the survivors for past acts of violence.

If you like happy endings, this isn’t the book for you. But I was drawn in by the writer’s skill in characterization. I finished the last half of the novel in one sitting. Mr Powers could have taken a path toward fantasy or magical realism, but he remains a dispassionate narrator where religion and mysticism are concerned. Where ideology is touted, it is science and environmentalism.

If there is a positive conclusion, the author places it in the long game. The trees and their forests have 400 million years on us. We can pillage and burn and cut our own throats, but we cannot win against beings that live many times our life spans and conduct their business as we human beings remain ignorant.