Music In The Heavens

Posted on 5 June 2021 by catholicsensibility

In pop culture, the star Vega is the source of the extra-terrestrial transmission that ultimately sends actor Jodie Foster on her wormhole journey to first contact. Why the aliens or author Carl Sagan would choose that star, who knows? It’s notable for one of the two brightest stars in the summer skies of the northern hemisphere. It’s a lovely name. Not Spanish for “meadow,” though that is a nice summery image. Like many stars, its name derives from the Arabic. It means “falling” or “landing.” The full reference is an-nasr al-wāqi, the “falling eagle.” Waqi somehow transmogrifying to Vega. 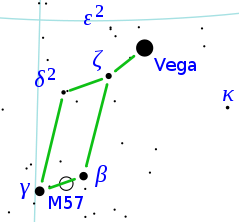 About midnight these days, the star is nearly overhead in North America and Eurasia. If you see two other bright stars nearby, the most brilliant of the three is indeed Vega.

Vega anchors a constellation, right. The size of the black dots represent the relative brightness of the stars in Lyra. The ancients saw a flying bird in the bright star, carrying that musical instrument–the four dimmer stars. The Greeks of old believed that upon his death, while Orpheus was buried, his lyre was placed in the sky to honor his memory of musical genius blackened by a tragic life without Eurydice, his beloved.

Europeans have still envisioned an instrument for music in these stars. In Britain various people see either the harp of King Arthur or the instrument of King David. I suppose if Christians seriously overtook the naming of stars from ancient cultures, David’s lyre would no doubt be a good view of these stars.

Interesting this is a thought, as a few lines from the psalms suggest God’s watchfulness and protection as we call out in the night. Night need hold no fears:

You shall not fear the terror of the night (91.5a)

It is a time of remembrance:

I remember you through the watches of the night (63:7b)

And even a declaration of trust:

Do the stars inspire wonder and confidence in people? They do for me. I hope also for some of you readers. If you find yourself bathed in summer starlight round about midnight, look up. Behold the music in the heavens. Catch a hint of singing, praying for you.

Todd lives in Minnesota, serving a Catholic parish as a lay minister.
View all posts by catholicsensibility →
This entry was posted in Astronomy, constellations, Scripture. Bookmark the permalink.