Vatican City @ Olympics, Not Yet

Posted on 27 August 2021 by catholicsensibility

Yesterday, the Paralympics kicked off in Tokyo. I send my greetings to the athletes and I thank them because they offer everyone a testimony of hope and courage. They, in fact, show how sporting commitment helps to overcome seemingly insurmountable difficulties. 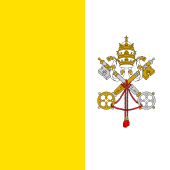 There’s also an Athletica Vaticana, an official sports team, founded two years ago. It includes paralympians. They are already part of associations in Europe, I read. But why are competitors limited to national identification?

I admit I have followed the three Olympic games far less as time has gone by. Announcers seem out of their depth when calling sports only seen once every four years. Expert commentary is often good, but overshadowed by too many words, too little prep, and just poor play-by-play. It can be excruciating.

I did notice the ROC debacle in Tokyo, which seemed a total joke given a documented history of doping and cheating. Other athletes poked at it, which was good. That whole mess is itself an offshoot of the brazen nationalism that may not have been such a part of the original Games in ancient Greece. (Or maybe it was–but it needn’t have been.)

I have no problem with clean, honest Russian athletes competing. Certainly not every Russian is a cheater. Other countries have cheaters too. But it seems simple enough to tally (if medals must be tallied) some competitors independently of their nations. That way, if two teammates from different nations in a pairs event want to compete, let them. If they medal, let it be assigned to “independent.” If a nation has misbehaved, it gets zero credit for medals–this is all the work of sportswomen and men in the end.

Likewise the situation about countries only being allowed two athletes per individual event. If China has three top table tennis people and the limit is two, why send the third home, if the person has fairly qualified? Let the third individual play, and let the nation’s sport committee delegate ahead of time which two are eligible for a national count. If all three go to the top, one will be assigned “independent.”

Of course, it would be better not to assign nation count of medals in the first place, but I doubt that’s ever gong to stop.

Todd lives in Minnesota, serving a Catholic parish as a lay minister.
View all posts by catholicsensibility →
This entry was posted in Commentary, Sports. Bookmark the permalink.